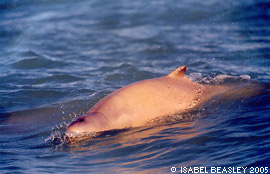 Experts say the discovery of a new mammal is extremely rare. In fact, the Australian snubfin is the first new dolphin species to be discovered in 56 years! Two scientists at James Cook University, Isabel Beasley and Peter Arnold, took DNA samples from the population of dolphins off the coast of Townsville, Queensland and sent them to the National Oceanic and Atmospheric Administration’s Southwest Fisheries Science Center in La Jolla, California. The results showed that George Heinsohn, (an Australian biologist who worked at James Cook University in the 1960s and 1970s on dolphin species for whom Orcaella heinsohni is named) was correct in his hypothesis that the Townsville population was a new species. Beasley noted that the snubfin has three colors; it’s dark on the dorsal side, graduates to a light brown on the flanks, and has a white belly. They have a rounded melon, which is very unlike other dolphin species in Australia. They also have a small, “snubby” dorsal fin, hence the name “snubfin.” The Irrawaddy, unlike the Australian snubfin, is a uniform slate gray with a white belly.

Unlike its more showy cousins, such as bottlenose dolphins, the Australian snubfin is a very shy dolphin that avoids boats.

Australian snubfin dolphins, Orcaella heinsohni, live in shallow coastal waters in northern Australia and possibly Papua New Guinea. In the Pacific Ocean off Townsville, about 200 individual snubfin dolphins were found. It is expected that the range of the species extends into Papua New Guinea, but that the majority live in Australian waters. They are not thought to be common and are being given a high conservation priority.

The reproduction of the Australian snubfin dolphin, Orcaella heinsohni, is likely very similar to the Irrawaddy dolphin’s.

Isabel Beasley is quoted as stating “Unfortunately, because they live in these environments, they are susceptible to many human threats including accidental catch in shark and fishing nets as well as effects of coastal development”

“Human threats on Irrawaddy dolphins in Southeast Asia are even more severe. Five Southeast Asian dolphin populations were recently classified as ‘Critically Endangered’ by the World Conservation Union. This means the total population is less than 50 individuals so there is a high chance of local extinction in the near future,” she said. (Source)

The taxonomic status of Orcaella in the northwest of Australia is unknown, and could be O. brevirostris, Orcaella heinsohni, or a new species. The following refers to the entire Orcaella genus only:

Orcaella are declining throughout their range in Asia because of increased human activity including invasion of their habitat. In addition to habitat loss, overfishing including targeted catches, bycatch, and overfished Orcaella prey are impacting the abundance of these species. The Australian coast poses fewer threats for Orcaella, which makes conservation efforts even more important to protect this species and guide its management. Some research on the distribution, abundance and ecology of Orcaella has been conducted in Queensland in northeastern Australia, where human impact may be a problem. Little research has been conducted in northwest Australia on the Kimberley coast, which is thought to be part of Orcaella’s habitat. This region is a remote coastal area that is beginning to become more heavily populated. This human presence may be resulting in habitat destruction and threats to Orcaella due to line trawling, tourism, recreational fishing, illegal fishing, petroleum exploration, and pearl farming. Studies here are urgently needed to ensure the longevity of Orcaella.