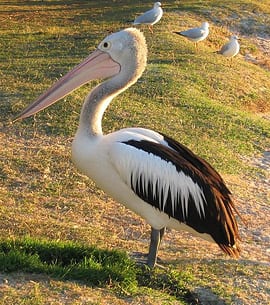 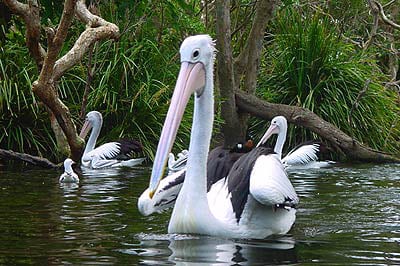 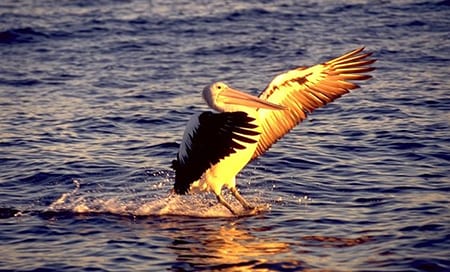 With a wing span of more than 3 m and a weight of up to 13 kgs, Australian pelicans, Pelecanus conspicillatus (Temminck, 1824), aka Australasian or spectacled pelicans, are one of the world’s heaviest flying birds and boasts the longest bills—up to 40 cm long—of any known bird. The pelicans’ weight is no burden to them. Graceful in flight, they can stay in the air for 24 hours and cover hundreds of kilometers at a stretch. Like other pelicans, they have webbed toes that transform their feet into paddles when they swim.

Australian pelicans may live 25 years or longer. They are generally white with black wings, a pale orange bill, and a slender arched neck. Some individuals may have a fuzzy gray area on the back of the neck.


The only pelican in Australia, Pelecanus conspicillatus is also found in Papua New Guinea and western Indonesia, with occasional reports in New Zealand and Sulawesi. Any area with a large body of standing water is a potential pelican habitat. Though normally associated with the coast, the Australian pelican can also be seen inland at times of high rainfall, particularly near freshwater, estuarine and marine wetlands and waterways including lakes, swamps, rivers, coastal islands and shores.

Australian pelicans mostly feed in groups, cooperating to herd and enclose schools of fish, then swoop down on their trapped prey. The pelicans are helped in this endeavor by their sensitive bills (for locating prey), hooked upper mandible (for snagging slippery fish), and characteristic expanding bill pouch (for netting and short-term storage). Flocks of nearly 2,000 birds have been sighted working together to feed. Australian pelicans are voracious, consuming up to 9 kgs of food per day, and they are not picky eaters. In addition to small fish, they will eat crustaceans, tadpoles, turtles, ducklings, and even sea gulls. They have even been known to be so brash as to follow humans into their homes, seeking food.

Depending on rainfall, colonial breeding may occur at any time of the year, usually in isolated places such as small, uninhabited islands. Courtship begins with a group of males trying to attract the attention of a single female by swinging their open bills back and forth, rippling their pouches, tossing and catching various objects, and changing the color of their bills and pouches to pink, yellow, and blue. If the ploy works and one male outlasts the others, the female will choose a nest site, digging a hole in the ground with her bill and feet and lining with with plants and feathers. She may lay 1, 2, or 3 eggs. Over the next 32 to 35 days, both parents will incubate the eggs with their feet. Hatchlings are mottled and vary in coloration around their faces, possibly to help parents identify their young. A month after hatching, the chicks form cohorts of up to 100 birds and begin the two-month long process of learning to fly and survive independently.

The Australian pelican is at low risk and is not considered an endangered species. However, major threats include habitat destruction, introduced predators, oil spills, and pesticide poisonings, like the dieldrin poisonings that killed many of the birds in the late 1970s.