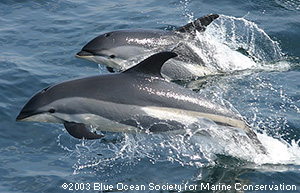 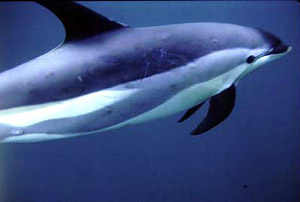 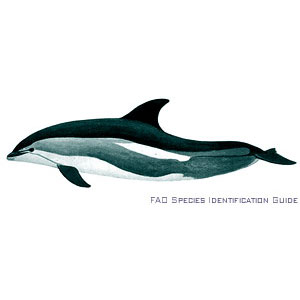 Atlantic white-sided dolphins, Lagenorhynchus acutus (Gray, 1828), get their name from the Greek lagenos, which means bottle, rhynchus, which means snout or nose, and acutus from Latin, which means sharp or pointed and refers to their sharply-pointed dorsal fins. These dolphins ranges from 2.5-3 m in length. Their pectoral fins are about 30 cm in length and their dorsal fins may be up to 50 cm in height. Their tail flukes range from 30-60 cm across. Females may be considerably smaller than males and average only 182 kg.

The dorsal (upper) region of L. acutus is black, their flanks are gray, and their ventral (under/belly) surface is white. This dolphin’s distinguishing characteristic is the yellow-white patches on their dorsal side and the black rings around their eyes. L. acutus have stocky bodies with sickle-shaped fins. Their beaks are prominent and contain 30-40 pairs of pointed teeth.

Atlantic white-sided dolphins, Lagenorhynchus acutus, are found in the temperate and subarctic waters of the north Atlantic Ocean from southern Greenland to Massachusetts, and from the British Isles to western Norway. Some have been spotted as far south as the Barents Sea, Baltic Sea, Azores, and the Adriatic Sea.
https://www.youtube.com/watch?v=HmkRO8U1OOQ

Atlantic white-sided dolphins inhabit open water that is typically 40-270 m in depth over continental shelves and is rarely seen from shore. This species is typically found in waters with low-salinity and surface temperatures between 6-20°C and they migrate seasonally along continental slopes.

Male Atlantic white-sided dolphins, Lagenorhynchus acutus, are sexually mature when they are between 2.1-2.4 m in length, females between 1.94-2.22 m or about 6-12 years of age. Calves are usually born in June and July following a gestation period of about 10 months and measure 1.1-1.2 m in length and average about 25 kg. Females nurse for about 18 months and give birth every 2-3 years.

Exact data on the population size of Lagenorhynchus acutus is unavailable but the species is thought to be abundant. Their primary threats, in addition to natural predation, are ocean pollution and entanglement in fishing gear.