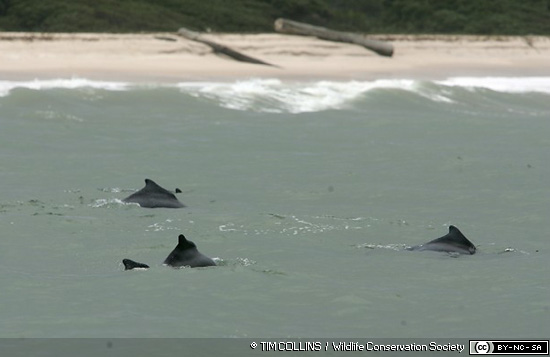 Atlantic hump-backed dolphins, Sousa teuszii (Kükenthal, 1892), aka Sotalia teuszi (Hershkovitz, 1966) and Sotalia teuszii (Kükenthal, 1892), measure a maximum of 2.5 m in length and weigh about 150 kg. They are slate to pale gray in color on their dorsal (upper) side with some speckled markings and lighter coloring on their ventral (under) side. They have long beaks, large melons (heads), and well-rounded flippers. Their common name comes from the shape of their unique dorsal fin, which measures about 15 cm high and curves to form a distinct hump. Their pectoral fins measure about 30 cm in length, and their flukes (tails) are about 45 cm wide.

Because of their geographic location in Africa near areas of civil strife, Atlantic hump-backed dolphins have not been widely studied.

Atlantic hump-backed dolphins have 26-31 pairs of homodont (all teeth are the same), peg-like teeth in each jaw. Their differences in tooth count and vertebrae, along with geographical location, are the major distinguishing characteristics between Sousa teuszii and the closely related Indo-Pacific hump-backed dolphins, Sousa chinensis.

Sousa teuszii is known to swim more slowly than other species in the Delphinidae family. They dive for periods up to 3 minutes and are known to jump out of the water. Other characteristics common to Delphinidae include their high brain-to-body mass ratio, which is higher than that of other mammals and thought to be an indication of intelligence. Like other dolphins, they are equipped with echolocation to locate prey and communicate.

Off the coast of Mauritania, this species has established an equitable partnership with local fishermen. The dolphins herd schooling fish closer to the shore when signaled by fishermen, this then allows the fishermen to net the fish and the dolphins to feed freely.

Atlantic hump-backed dolphins are found off the coast of west Africa from Mauritania to Angola. This species prefers shallow coastal waters, river channels, and estuaries. This is a somewhat solitary species which have been observed traveling and feeding alone, however small groups of 3-7 and larger groups of 20-25 have also been reported, generally these groups consist of younger dolphins.

It is thought that Atlantic hump-backed dolphins stay near the shore to avoid predation by orcas (killer whales) that use echolocation to find the dolphins and being close to land makes that difficult.

Atlantic hump-backed dolphins feed on schooling fish such as herrings, sea breams, sardines, and mullet. When feeding in groups, they herd their prey close to land, making it harder for them to escape.

The reproductive patterns of Atlantic hump-backed dolphin are not well known at this time. Calving has been recorded from December through February but may also occur year-round.

Like other dolphin species, Atlantic hump-backed dolphins are at-risk of being caught in fishing gear, and their proximity to the shoreline causes them to get caught in “anti-shark” nets set up to protect beachgoers. Coastal development is also reducing the habitat of this species causing decreases in their populations.