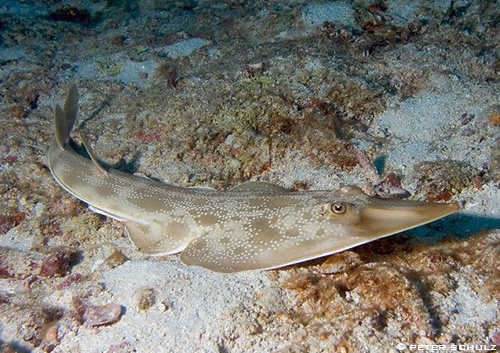 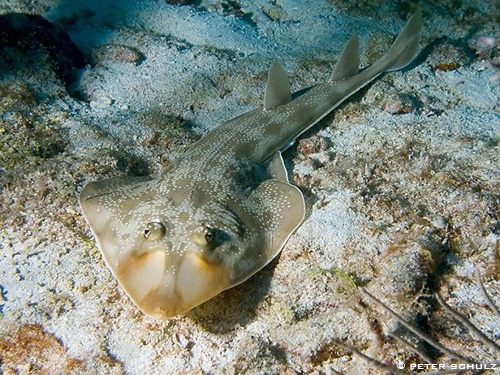 Atlantic guitarfishes, Pseudobatos lentiginosus (Garman, 1880), aka freckled or spotted guitarfishes, are classified in the guitarfishes order Rhinobatiformes and are one of about 41 known existing species of guitarfishes, many of whom are threatened with extinction.

These amazing and rare fishes are more of ray than a shark and have the typical guitarfish body form, somewhere in between the sharks and rays. They have flattened elongated bodies with triangular or “shovel-shaped” heads and small ray-like wings instead of pectoral fins and two dorsal fins. They are one of the smallest species of guitarfishes and reach lengths of only 0.75 m in males and 0.76 m in females (typically about 0.6 m).

They are ashy gray to olive brown or even a chocolate brown. Their upper surface is thickly “freckled” with several hundred small whitish dots. Their underside is pale yellow to white with their fins slightly darker in color.

As with all guitarfishes, they swim like sharks usually do, by moving their tails from side-to-side. Atlantic guitarfishes typically also swim with their heads slightly higher than their tails.

Atlantic guitarfishes have 56-80 blunt teeth (in 8-10 rows) in their upper jaws and 51-82 teeth (in 7-9 rows) in their lower jaws. Their teeth are rectangular at their base with rounded corners and are fit closely together.


Atlantic guitarfishes, Pseudobatos lentiginosus, are found in tropical coastal waters, as well as in estuaries and even freshwater, usually at depths between 0 and 30 m. Their range is the western Atlantic (36°N-18°N, 99°W-75°W) from North Carolina, USA to the northern Gulf of Mexico and Yucatan, Mexico.

They are found to inhabit sandy and weedy bottoms, sometimes near patch reefs, as well as along beaches from the shoreline out to depths of about 30 m. They are found usually buried in the sand or mud when not actively hunting.

Atlantic guitarfishes, Pseudobatos lentiginosus, feed on benthic (bottom-dwelling) creatures like mollusks such as scallops, crustaceans (e.g. shrimp), and a variety of small fishes.

Larger predatory sharks are likely to prey on Atlantic guitarfishes.

Atlantic guitarfishes, Pseudobatos lentiginosus, reproduce by ovoviviparity (aplacental yolksac viviparous) with up to 6 pups in a litter. These fish reproduce by internal fertilization and give birth to live young that are fully developed and measure approximately 20 cm in length. Males are believed to be mature when they are 48-51 cm in length due to the development of their claspers at that stage. Along the lower Texas coast, the females there are thought to give birth during late spring to early summer with fertilization occurring shortly afterward.

Atlantic guitarfishes, Pseudobatos lentiginosus, are listed as Near Threatened (NT) by the IUCN Red List:

“The Freckled Guitarfish (Rhinobatos lentiginosus) has a wide distribution in the southeast USA and coastal regions of the Gulf of Mexico, from North Carolina to Yucatán, Mexico and also Nicaragua. A shallow coastal species from inshore to 30 m on sandy and weedy bottom types. In some regions, for example Texas, it appears to be only seasonally and locally common.

Little biological information is available for the Freckled Guitarfish. It reaches 76 cm TL and has a low fecundity (mean of 6.6 young/litter in the USA). Its narrow inshore habitat is susceptible to human impacts. It is taken as bycatch in bottom shrimp trawls in the Gulf of Mexico and occasionally by recreational fishers. Shrimp trawl fishing is intense in the Gulf of Mexico, particularly in shallow waters where this species occurs, with four to five million trawl hours annually. Although data from trawl surveys on the eastern coast of the USA (1989-2005) showed no trend in the population of this species, trawl and longline surveys in the northern Gulf of Mexico (1972-2002) recorded it in only very low numbers, with the last record in 1994.

Rhinobatids are known to be vulnerable to population depletion as a result of their limiting life-history characteristics and serious declines have been documented where they are heavily fished. Given that demersal fishing pressure is very intensive throughout the southern part of this species range and its limiting life-history characteristics, it is given a precautionary assessment of Near Threatened on the basis of inferred declines as a result of continuing high levels of exploitation (close to meeting the criteria for VUA2d+4d). Collection of further data from throughout this species range is a priority.

Major Threat(s): Taken as bycatch in shrimp trawls in the Gulf of Mexico. Shrimp trawl fishing is intense in the Gulf of Mexico, particularly in shallow waters, with 4-5 million trawl hours annually (Shepherd and Myers 2005). Trawl and artisanal fisheries also operate throughout this species’ inshore range off Nicaragua (FAO 2008).”

Reaction to divers: Generally easy to approach with careful slow movements especially if encountered while free diving. Moves away or bolts upon very close examination.

Diving logistics: Atlantic guitarfishes are common visitors to fishing piers around Panama City in the late spring and summer months. Spring is the best time to dive or snorkel with them because during the summer most piers are closed to in water activities to avoid disturbing fishermen.

Dive centers in Pensacola, FL. have reported numerous sightings of guitarfish adjacent to the artificial reefs created by dropping bridge spans off the coast.