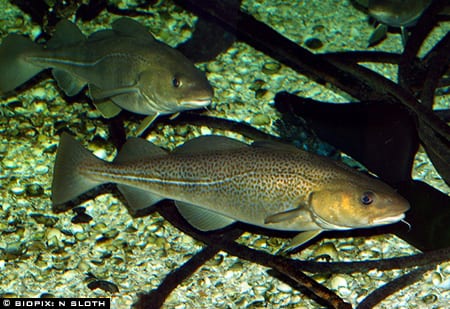 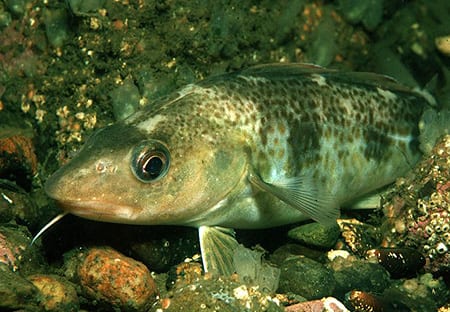 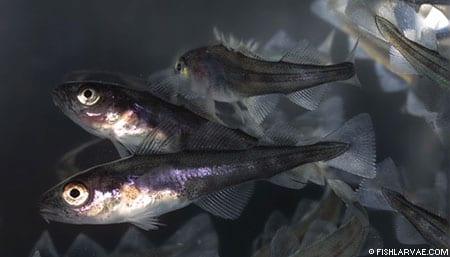 Atlantic cod, Gadus morhua (Linnaeus, 1758), are one of the most popular food fishes in the western world. Distinguished by a distinctive elongated hairlike structure called a “barbel” that hangs from their chin, they also have three dorsal fins, two anal fins, and broom-shaped tails. Atlantic cod are longer-lived and larger than their Pacific counterpart, and may reach 25 years in age, 200 cm in length, and 96 kg in mass. (Most Atlantic cod, however, weigh closer to about 30 kg.) Atlantic cod are brown to green or gray on their dorsal (upper) sides and flanks, with a paler ventral (under) side and they have smooth, small scales.

The other two closely-related species in the genera Gadus are: Gadus macrocephalus, Pacific cod and Gadus ogac, Greenland cod.

Atlantic cod are found in temperate climes ranging from the shallows near the shore to deeper waters near the continental shelf. Their habitat stretches from Greenland to North Carolina; off the coast of Iceland; and along the coasts of Europe from the Bay of Biscay to the Barents Sea, which is their most important feeding area. The northeast Arctic or Arcto-Norwegian stock is at present the world’s largest population of Atlantic cod. This stock is sometimes referred to as skrei, a Norwegian name meaning something like “the wanderer”, distinguishing them from non-migrating coastal cod.

Atlantic cod are omnivorous, feeding at dawn or dusk on a variety of invertebrates and fish. Northeast Arctic cod also shows cannibalistic behavior. Prior to its recent population decline, the adult Atlantic cod were top-tier predators in the northwest Atlantic, along with haddock, flounder, and hake, feeding upon smaller prey such as herring, capelin, shrimp, and snow crab. Now that the cod stocks have markedly decreased (some say crashed permanently), their prey has had a population explosion, and many of those animals have become the top predators in that food web. Larval cod feed on krill, larval copepods, and other small crustaceans and fish.

Atlantic cod are remarkably fecund fishes — depending on their size, females can lay between 2.5 and 9 million eggs in a single spawning. Atlantic cod reproduce annually during the winter and early spring through external fertilization, with spawning taking place near the seafloor when temperatures are between 0-12°C and the water’s oxygen content is suitable. Sexual maturity is attained between ages 2 to 4, though some fish may not spawn until about 7 years of age.

“A taxon is Vulnerable when it is not Critically Endangered or Endangered but is facing a high risk of extinction in the wild in the medium-term future, as defined by any of the criteria (A to E). ”

In U.S. waters, Atlantic cod are managed as two stocks: Gulf of Maine, and Georges Bank and Southward. Both stocks constitute important year-round commercial and recreational fisheries. Outside the U.S., the most commercially fished stocks are the Norwegian Arctic “skrei” stock in the Barents Sea and the Icelandic stock. A very popular fish for human consumption — their flaky white flesh is renowned, and their liver is used to make cod liver oil — the Atlantic cod has declined in population dramatically over the last decade. Atlantic cod stocks have been particularly important, historically, in the northwest Atlantic off the coast of Canada, Maine and Massachusetts. The cod has been called “Newfoundland currency,” and was so important to New England’s early economy that a carved wooden cod was hung in the Massachusetts House of Representatives in Boston. Sadly, stocks of the fish off eastern Canada and New England collapsed in the early 1990s, after commercial fishing targeting larger and older cod diminished the number of fertile females. Today, this stock is reported to have decreased by 96% since the 1850s. Moratoriums in the region, in place on and off for the past few decades, do not seem to have worked, and the stock has been depleted to the point where scientists are unsure if it will ever recover.