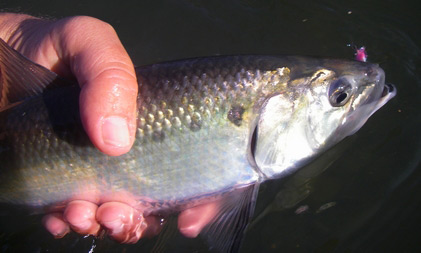 American shad, Alosa sapidissima (Wilson, 1811), are one of the best-known shad species, as well as the largest — and allegedly one of the tastiest. (Sapidissima means “very delicious.”) They are also known as shad and common shad, Atlantic shad, Connecticut River shad, herring jacks, north river shad, Potomac shad, Susquehanna shad, and white shad.

They can be easily distinguished by their sharp saw-like scales or “scutes” along their bellies. Their belly also has a distinct keel, and their body is moderately compressed. A handsome fish, the American shad has a lustrous green or greenish blue back with silvery sides and a white belly. Their colors darken to a brownish shade when they enter freshwater to spawn. Adults may also have one or more dark spots in a row, or, more rarely, two rows, behind their operculums or gill flaps.

American shad’s lower jaws have pointed tips that fits into v-shaped notch in their upper jaws. (A similar fish, the menhaden, often also referred to as “shad,” has a rounder lower jaw than the American shad.)

Most American shad grow to about 76 cm in length and weigh 0.9-1.4 kg, though they may occasionally reach 2.3 kg, and records exist of an American shad that weighed slightly over 5.4 kg.


During an average life span of five years at sea, an adult American shad may travel more than 19,313 km. They undertake extensive ocean migrations, spending the summer and fall in the Gulf of Maine and overwintering in deep offshore waters. During late winter, they make their spawning runs into rivers along the east coast of the United States, notably the St. Johns River. They generally prefer depths ranging from 0 to 250 m, though they may dive to 375 m.

The American shad is found only in temperate climates, ranging from Newfoundland, the St. Lawrence River, and Nova Scotia southward to central Florida. Along the coast of the Florida Panhandle, the species has been replaced by the endangered Alabama shad. American shad were introduced into the Sacramento and Columbia Rivers in the Pacific Northwest in the late 1800’s, and in 1990 the population of shad entering the Columbia River was over 4 million fish. The American shad is now found from Cook Inlet, Alaska to Baja California in Mexico and the Kamchatka Peninsula.

Like salmon, American shad are an anadromous species, meaning they come into fresh water to spawn. Historically, American shad probably spawned in virtually every accessible river and tributary along the Atlantic coast. However, blockage of spawning rivers by dams and other impediments and degradation of water quality has severely depleted suitable spawning habitats for this fish.

A female may lay up to 600,000 eggs, while several hovering males fertilize them. The fertilized eggs float downstream and hatch in 3 to 10 days.

Newly hatched larvae remain in fresh water, feeding on copepods and insect larvae, until they reach about 10 centimeters in length, generally in the space of a month.

The first months of life are the most hazardous; about 70 percent of young American shad die before reaching the sea. Those who make it past the first few months form large schools and move out to deeper, salty waters, where they spend they spend the rest of their lives.

After four to six years they reach sexual maturity and begin to return to their natal rivers to spawn.

Female American shad may live up to 10 years, though that is twice the fish’s average lifespan.

Since colonial days, American shad have been valued both for their meat and roe. But their numbers have been in decline over the past 75 years, primarily because of overfishing and habitat degradation in spawning areas. Shad stocks were in such poor condition that in 1980 Maryland imposed a moratorium on shad fishing except in the Potomac River and coastal waters. Measures to boost the American shad population include hatcheries and fitting dams and blockages on rivers with fish passages to allow American shad to reach their historical spawning areas. Since the completion of such dams on the lower Columbia River, shad populations have started to rise. (The slow moving waters of reservoirs apparently provide ideal conditions for juvenile shad.)

The American shad is commercially caught in rivers and estuaries during spawning migration and sold fresh, salted, or smoked. The roe (eggs) is also highly prized. Some American shad may have parasites, including nematodes, Acanthocephala, copepods, and distomes.