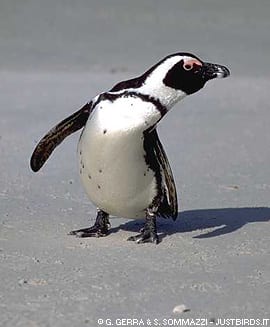 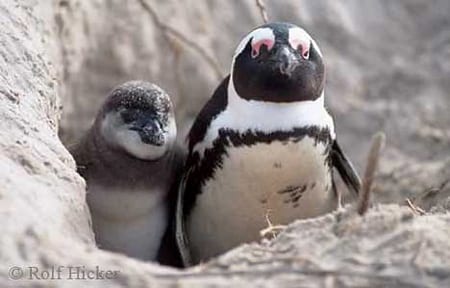 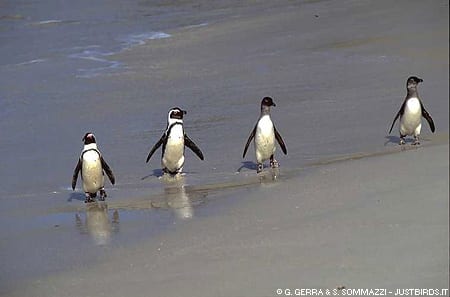 African penguins aka jackass or black-footed penguins, Spheniscus demersus (Linnaeus, 1758), are the only penguin species found on the African continent. They are also referred to as the “jackass penguin” because of its ability to emit a loud, braying donkey-like call. This medium-sized penguin has a robust body with black plumage on its back and white plumage with black markings on its chest and belly. They also have a characteristic u-shaped white band that wraps around the eye from the chin area toward the beak, and a horseshoe-shaped black band across their chest. Juveniles have gray-blue plumage that darkens with age until they have the same coloring and markings as adults when they are about 3 years old. Adults stand about 45 cm tall and weigh an average of 3.1 kg.

Penguins are “waterproof” because of the small muscles found at the base of their feathers used to bind the feathers tightly to the body and because their feathers are waterproofed by a waxy substance. The wax is distributed from the base of the tail to the tips of the feathers as the penguins preen. Their feather muscles used to grip the feathers to the body are also used to hold their feathers out so that a warming layer of air can be trapped between their body and the feathers. African penguins have developed unique adaptations to life in the temperate zone. They limit their daylight activities at breeding sites on land to early morning and early evenings to avoid too much sun. They also build their nests where there is protection against too much solar radiation. Penguins that are not breeding typically spend the entire day in the ocean or, they stay on the beach in large groups and swim frequently to stay cool.

African penguins can swim up to 20 kph and can travel distances between 30-70 km during each trip. Average dives, however, average about 2-3 minutes reaching depths of up to 60 m.


African penguins, Spheniscus demersus, are found on the coast and islands of southern Africa and Namibia. There is a chain of islands between Hollamsbird Island, Namibia and Bird Island in Algoa Bay, South Africa where these penguins often form colonies, or rookeries, for breeding and molting grounds. Molting occurs annually between November and January in South Africa and between April and May in Namibia when the penguins come ashore for about 3 weeks.

The distribution of this species’ range somewhat coincides with the cold and nutrient-rich Benguela Current that flows north from Antarctica along the west African coast.

African penguin pairs return to the same breeding sites year after year. Although breeding takes place throughout the year, nesting peaks in Namibia from November to December and in South Africa from March until May. Females typically lay two eggs, which are then incubated by both parents for about 40 days. All penguins have a patch of bare skin at the base of their bellies, sometimes called a “brood patch“, that helps the parent provide enough heat to incubate the eggs. After the eggs hatch, the pair will feed the chicks for about one month by regurgitating food into the chick’s mouth. Chicks are then left alone in crèches, or groups, a characteristic common to bird species that breed in large colonies, while their parents forage for food. Chicks leave the colony once they develop their juvenile plumage in between 2-4 months.

Because of numerous oil spills throughout its habitat, African penguins are listed as Endangered A2ace+3ce+4ace with their population in rapid decline according to the IUCN Red List.

ENDANGERED (EN) – A taxon is Endangered when the best available evidence indicates that it meets any of the criteria A to E for Endangered (see Section V), and it is therefore considered to be facing a very high risk of extinction in the wild.

This species is also threatened by reduced availability of food sources due to overfishing and competition with seals for breeding grounds.