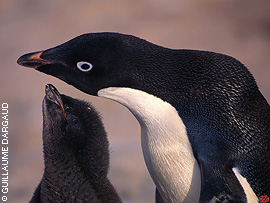 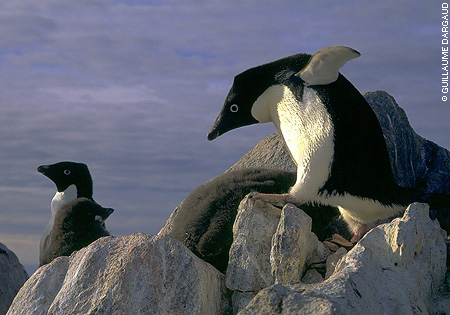 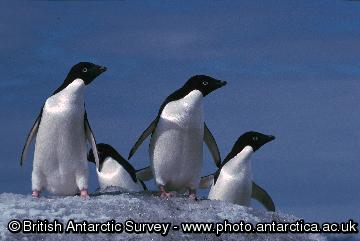 Adelie penguins, Pygoscelis adeliae (Hombron & Jacquinot, 1841), are the quintessential tuxedo-sporting penguins. They have a solid black head, black back with blue-tipped feathers, and a solid white belly. The Adelie also has a white ring around its eyes. Adults weigh between 4-6 kg and stand about 71 cm tall; males are typically slightly heavier than females. Juveniles have more blue in their feathers until they reach maturity at about 2 years of age. Chicks have dark gray heads and are covered in gray down, which insulates them from the cold on land. They are not yet waterproof until their down is replaced by waterproof feathers when they are almost 2 months old.

Like other penguin species, Adelie penguins are powerful swimmers and can reach swim speeds up to 15 kph. On average, they swim 4 to 7 kph. Adelies breathe when swimming by leaping in and out of the water. When they reach faster speeds, they are able to leap out of the water and onto pack ice up to 2 m high. On average, Adelies dive to a depth of about 45 m for about 1.5 minutes in search of prey, although they have been observed diving up to depths of 180 m. Their large, dense bones help them stay submerged, however most foraging takes place near the surface.

Like the now famous emperor penguins in March of the Penguins, Adelies can walk long distances at speeds that average 2.5 kph. They also conserve energy by sliding across the snow on their bellies using their feet to propel themselves forward.


The Adelie penguin, Pygoscelis adeliae is common along Antarctic mainland coast and surrounding islands. A habitat they share with the emperor penguin.

Adelie penguins, Pygoscelis adeliae, primarily feed in coastal waters, although some Adelies from northern colonies may venture farther out to sea. Like their neighbors, the emperor penguins, they feed on small fish such as Antarctic silverfish and krill, particularly crystal krill, Euphausia chrystallorophias, and Antarctic krill, Euphausia superba.

Male Adelie penguins form breeding colonies near the Antarctic coastlines in mid- to late-October where they build a nest consisting of small stones, which allow good drainage during incubation so that the eggs remain dry and warm. When the females arrive, pairs begin mating, an event marked by loud, vocal displays by both males and females. The male stands on the female’s back while mating, and a clutch of 2 eggs (sometimes 3 eggs) are fertilized and laid several days later in late November to early December. Adelies begin breeding behavior when they first visit breeding colonies, commonly their natal breeding colony, to claim a nesting site when they are 2 to 4 years old. About 67% claim sites within 200 m of their birth site, a behavior known as natal philopatry. Between 100 and 250,000 pairs breed in each colony, which are commonly located near nutrient-rich ocean upwellings. Parents share the incubation responsibilities and the initial chick-rearing phase when they take turns foraging for food during the first 3 weeks. This phase is followed by the crèche phase when the chicks form small groups while both parents forage. When the chicks are around 2 months old, they are ready for independence and fledge, or leave the nest.