Should we interact with wildlife at aquariums? 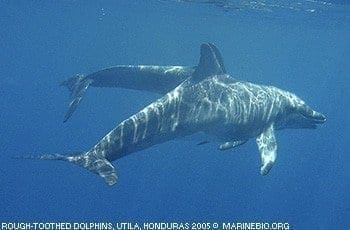 Twice recently, stories have appeared in the news about humans being bitten by animals at human/animal interaction exhibits. In one instance, almost a dozen people were bitten by sharks at a shark petting exhibit in Newport, Kentucky. Shark petting!? Granted these aren’t tanks full of bull sharks, and the concept of shark petting certainly dispels the myth that sharks are mindless maneaters, but do humans really need to pet sharks? Do the sharks enjoy being touched? I doubt it.

At $eaworld in Orlando a young boy was bitten by a dolphin. Everyone wants to pet dolphins, or swim with dolphins – we all do. So $eaworld stated that they plan to send the dolphin off for some behavior modification – the poor thing was probably only defending itself against relentlessly poked and prodded and teased with fish. I think humans need to modify their need to interact with animals that belong in the wild. I had the privilege of interacting with dolphins last year in Honduras (see photo), they were friendly and curious – and I was in their environment. So they were free to check me out and free to take off when they wanted. I would much prefer that experience over being one of thousands of people lining up to “pet” dolphins in captivity.

If the animals are in need of veterinary care and rehabilitation, then I’m all for keeping them in captivity until they can be returned to the wild. But it just seems unnatural to me to keep them as puppets for entertaining humans.