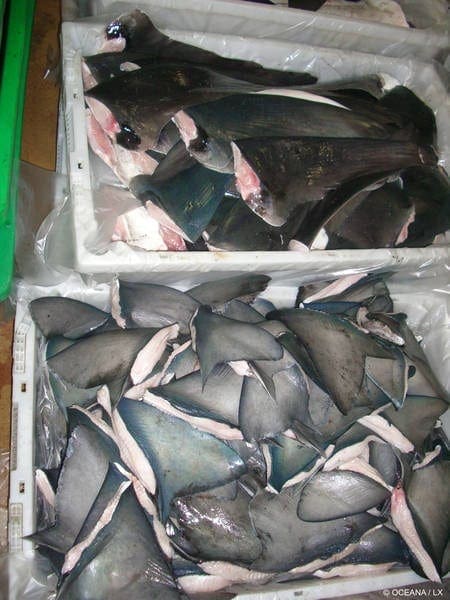 I can’t bear the ignorance any longer. Spread the facts: SHARK FIN SOUP IS BAD

Because travel is one of life’s greatest pleasures, I often watch the Travel Channel to travel vicariously when I’m not traveling myself. There’s a show that I find interesting for its glimpse into off-the-beaten-path cultures, but not so much for its main focus – the consumption of “bizarre” food. Unfortunately, a recent episode featured the show’s host eating a bowl of shark fin soup – and enjoying it. I didn’t see the episode, but I’m guessing he didn’t mention the plight of sharks while he slurped the soup and allegedly enjoyed it.

This is irresponsible on behalf of the Travel Channel and on behalf of the show’s producers and host. They passed up a perfect opportunity to advocate for sharks rather than contribute to their depletion by promoting the consumption of shark fin soup, which I hear doesn’t taste that great anyway. It’s a status thing. Ugh.

Sharks are essential to the health of the ocean. Period. Why? Well, here’s a recent press release from Oceana with news of a report that will tell us why. And if you want more information, I highly encourage you to see Sharkwater.

Sharks have unfortunately fallen victim to the man-hungry “Jaws” stereotype society has created for them. But as Shark Week nears, Oceana wants the world to know that what we should really fear are oceans without sharks. Sharks now represent the largest group of threatened marine species on the World Conservation Union’s (IUCN) Red List of threatened species.

Each year, humans kill more than 100 million sharks worldwide. Shark finning alone kills 26 to 73 million sharks annually. Because shark carcasses are bulky, take up a lot of space and are less valuable, they are often thrown overboard. In fact, the practice of shark finning is extremely wasteful and only uses between one and five percent of the shark.

As apex, or top, predators of the sea, many shark species are a necessary component to maintaining a complex ecosystem full of diversity and life. These top predators affect other animals in a cascading effect throughout the entire ocean. Sharks feed on the animals below them in the food web, helping to regulate and maintain the balance of life in the ocean. Sharks also can indirectly control the health of coral reefs and the health of seagrass beds, and ultimately, bottom communities.

In addition to regulating species abundance, distribution and diversity, sharks provide essential food sources for scavengers and remove sick and weak individuals from prey populations. Predators as Prey gives a glimpse of what the oceans might look like without sharks: economically important fisheries shut down; coral reefs shift to algae dominated systems; seagrass beds decline; ecological chain reactions are set in motion; and species diversity and abundance decline with the loss of habitats.

“Sharks are undoubtedly critical to maintaining the health of ocean ecosystems,” said Griffin. “Shark populations must be protected and restored to ensure healthy oceans in the future.”

Protecting sharks and allowing their populations to recover is critical to restoring the health of our oceans. Oceana’s new report describes three steps that are essential to protecting shark populations worldwide:

The National Marine Fisheries Service (NMFS) recently took action to better protect sharks by requiring all federally permitted shark fisheries in the Atlantic Ocean and Gulf of Mexico to land sharks with their fins still naturally attached. The U.S. House of Representatives also took action by passing the “Shark Conservation Act of 2008” earlier this month. This legislation will improve existing laws that were originally intended to prevent shark finning and will allow the U.S. to continue being an international leader in shark conservation. Senator John Kerry (D-MA) recently introduced the same legislation in the Senate.

“With time running out for this session of Congress, Oceana looks to the Senate for fast action to enact the Shark Conservation Act of 2008 into law,” said Beth Lowell, federal policy director at Oceana.