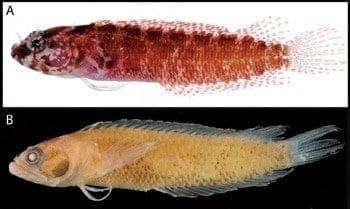 ScienceDaily (Feb. 5, 2011) – Things are not always what they seem when it comes to fish — something scientists at the Smithsonian Institution and the Ocean Science Foundation are finding out. Using modern genetic analysis, combined with traditional examination of morphology, the scientists discovered that what were once thought to be three species of blenny in the genus Starksia are actually 10 distinct species.

The team’s findings are published in the scientific journal ZooKeys, Feb. 3.

Starksia blennies, small (less than 2 inches) fish with elongated bodies, generally native to shallow to moderately deep rock and coral reefs in the western Atlantic and eastern Pacific oceans, have been well-studied for more than 100 years. It would have been reasonable to assume that there was little about the group left to discover. Modern DNA barcoding techniques, however, suggested otherwise. While trying to match larval stages of coral reef fish to adults through DNA, the team of scientists noticed contradictions between the preliminary genetic data and the current species classification. Further investigation revealed that the team was dealing with many species new to science, including the new Starksia blennies