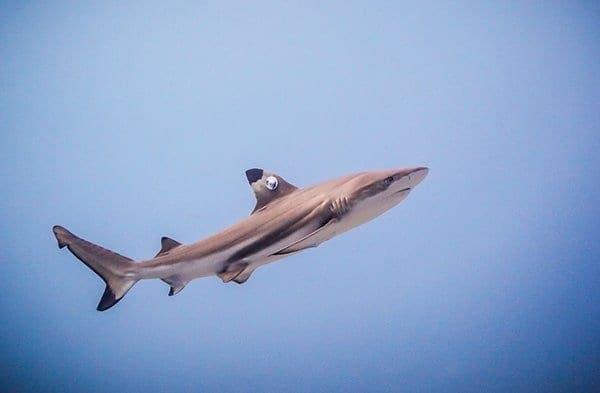 From our friends at the Gili Shark Foundation:

Indonesia is the largest exporter of shark fins in the world. There is no current (or planned) legislation for the protection of reef sharks in Indonesia and CITES Appendix II (which only covers international fisheries) does not cover them either. This means that the fishermen around Indonesia are acting totally within the law by catching, killing and finning these animals. The animals are sold at the local fish markets for a small price in huge numbers. Ideally we would be able to use legislation to ban all fishing of sharks, however, this isn’t realistically going to happen any time soon. The local Indonesian fishermen will land anything they can from the sea in order to make some money. When we were at Tanjung Luar Market the array of reef fish, eels, sharks, rays and pelagics was unbelievable. They will take anything they can.

There is no way we can currently affect the fishermen’s trade. They are legally allowed to do this and will do so in order to make a living. 17% of the rural population lives in abject poverty. If we cant stop them from landing the Reef Sharks then we have to try and find another way of saving them. We have been working with the Gili Eco Trust and have decided to try and intercept the sale of the sharks to the market by buying them straight from the fishermen before they are killed. By releasing them in ‘safe’ places maybe the Indonesian government and the fishermen will see the impact it has on dive tourism. If we can build a shark sanctuary around the three North-Eastern Gili Islands, which are less than 50 miles from the awful Tanjung Luar fish market then maybe we can change the minds of the legislators. We already have Project Momentum, which is attacking the problem from the top, but with this initiative we can also build up from the bottom to create a concerted effort all round closing the gaps and attacking the problem of the decline of our shark populations from all sides.

So, our aim here is to keep these sharks alive by intercepting them and preventing them from being killed and sold at the local markets. We have been able to make contact with local Balinese fishermen and have let them know that, for a nominal price, we will buy any sharks that are caught so that they don’t have to be killed and sold at the market. The local fishermen we have dealt with actual seem very interested and want to keep the sharks alive, but, of course their small income is a priority for them. This creates a dilemma for us. As shark conservationists we don’t want to create a bounty for live sharks and we don’t want to support shark fishing in anyway. This is absolutely not what we want or plan for. However, there is no way we can stop the fishermen catching these sharks and so if we don’t act in anyway we can, they will 100% end up in the fish market. It is up to us to act now and by doing so maybe we can show just how much tourism is generated and international acclaim is received by creating a second shark sanctuary in one of the worst countries for Elasmobranch fishing.

We received a call a while ago from a fisherman that had caught 6 white-tip reef sharks that were all around a meter long. He was calling us to give us first refusal, because he had heard about our efforts to save these creatures, before he took them to the fish market. We settled on a price of Rp 2,700,000 (around $270) for all of the sharks including delivery to a sea pen in Bali. Monetarily this is nothing. It just shows that we are not being held hostage by fishermen trying to ransom sharks to us and it shows that we are not encouraging the fishing of sharks by paying extortionate prices. It does however give us a glimmer of hope on two levels. Firstly, we have saved six beautiful sharks from the dinner table; in a world where over 100,000,000 sharks are killed each year this is a small achievement yet it is still a step along the way. Secondly, and maybe more importantly, a local Indonesian fisherman has decided to go out of his way to help us protect these sharks. That again is a small step, but if we can then show Indonesia what each small step adds up to, then I think we are well on the way to making a serious change here. This is a huge task, but wouldn’t it be great if we could make even a small bit of difference. You never know what can happen.

So this leads me on to where we are now… 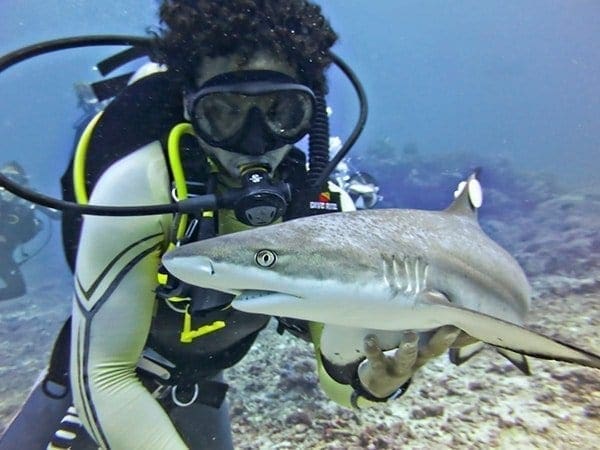 We have been working with Paul Friese from Bali Sharks because of his contacts within the local Balinese fishing community and because of his location with a purpose built sea pen in Bali. He has been rescuing sharks in this way for some time now housing and making sure they are healthy and then releasing them in a secret location off Sanur. Unfortunately, he cannot provide any monitoring after release as there is no shark foundation over there and there seems to be no communication between dive shops unlike Gili Trawangan. Here we have GIDA, we have the Gili Eco Trust and we have a fiercely strong dive community that work together on a conservation level as well as safety and business levels phenomenally well. We have rubbish collections, we have Finathons we have events for earthquake victims, we have Biorocks and MPAs and we also now have the Gili Shark Foundation. This just shows how much we come together as a community. We have the habitat, over 3000 hectares of no go zones (No fishing, no diving and no snorkeling). We have the fish stocks because of this. And we have a decimated yet existing shark population that is breeding; we have all seen the beautiful juveniles and the heavily pregnant females cruising around. This shows us that they are healthy and our islands are a good and safe place for them to breed. Our islands are capable of supporting a much larger shark population than we have at the moment, some of you may be able to remember how many there used to be. Apparently, from our research, sharks used to be common right off the front on the Biorocks. This is why we decided to start to release the sharks that are ‘ready’ into our waters.

Last Saturday four conservationists all traveled back over to the Gili Trawangan on the Gili Getaway fast boat with four sharks. Earlier that morning, we had packed them into polyboxes with hyper-oxegenated water and 100% pure oxygen. We got them back to the island where there was a team of people who helped us unload them from the fast boat straight onto one of the Big Bubble boats. We then drove out to our chosen release site, which was Manta Point where we have seen numerous sharks of both species. Each of the four teams were responsible for a shark and we had supervisors for each team as well as a supervisor watching all teams. We tagged and wrote down the vital information about each shark and then descended with the sharks after acclimating them to our water salinity and temperature and released them one by one underwater.

As you can all see it was a phenomenal success. It was a great moment for each one of the sharks as they had previously been bound for the fish market. It was also a great success for the island not to mention a wonderful experience for everyone involved. Being all of our first experiences releasing sharks, it didn’t go without any hiccups. It was wonderful yet traumatic at the same time.

The white tips were incredibly strong and instantly were accustomed to their surroundings. They swam off purposefully. Unfortunately the black tips weren’t as strong. They were obviously disorientated but after an incredible amount of help from the divers they were swimming freely. We had all pretty much run out of air by the time we had to surface. One of them had bitten into the plastic and it had to be removed form its jaws in order to breathe freely. We would love all your ideas thoughts comments and advice so please don’t hesitate to like our FB page ‘Gili Shark Foundation’ and contact us at: https://www.facebook.com/gilisharkfoundation