Save this tiny fish… 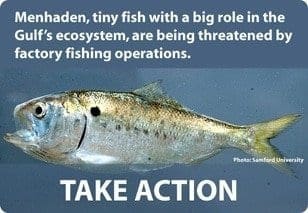 … for it has a big role to play in the Gulf of Mexico.

Menhaden, Brevoortia patronus, are small fish that play a critical role in protecting the health of the Gulf of Mexico and other parts of the ocean. They play a critical role in the Gulf’s ecosystem by filtering pollutants out of the water and providing a food source for dolphins, pelicans and other marine life. They have been referred to as “the most important fish in the sea.” The Texas Parks and Wildlife Commission has proposed new protections for menhaden from the threat of factory fishing. Unfortunately, the Houston-based Omega Protein (the largest menhaden company in the US) is fighting to stop the new standards.

Tell the Parks and Wildlife Commission that you support the new standards and want them to go even further to protect menhaden and the Gulf ecosystem.

This action will not only make your voice heard on behalf of a resource being quickly depleted by the fishing industry, it will also make policy-makers aware that the public is watching and is concerned about the health of our ocean.