Save the Whales and Dolphins! 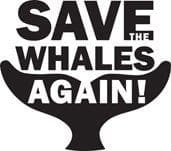 Years ago the phrase “save the whales” was synonymous with “ignore the treehuggers” – which was maddening because the whales really did need saving. And, they still do. At least the last campaign was successful in that the International Whaling Commission was established, though enforcing the moratorium on whaling hasn’t always been successful thanks to countries like Japan that insist on continued whaling in the name of “scientific research.”

Thanks to organizations like Greenpeace and Sea Shepherd, and celebrities like Hayden Panetierre, the campaign is making a big comeback as people and organizations speak out against the destructive and inhumane treatment of whales and dolphins. We applaud the efforts of Greenpeace as they defend the whales against the Japanese whalers in the protected waters of the Southern Ocean.

And we applaud Hayden Panetierre as she takes advantage of her rising star by using her celebrity status to speak out and to encourage other young people to speak out. The more people are aware of that these problems exist, the sooner they’ll be resolved. Public pressure is a powerful force. I think Greenpeace whaling activist and blogger Sara put it best:

A picture can paint a thousand words, so the saying goes. Yesterday I did an interview with the BBC and was asked if Greenpeace only comes to the Southern Ocean for the publicity and the pictures. Publicity is an important part of any campaign, for any one on any issue. Global media means global attention for a problem and that in turn ensures that far more people are aware of the problem than would have been before. In Japan one of the most difficult things about trying to end whaling in the Southern Ocean has been that the issue has gone largely unreported. That is changing and the media attention which the issue is getting means that we have seen far more people in Japan opposing whaling, because now they are getting the facts. That is a major step forward.