Response from Iceland to an anti-whaling letter 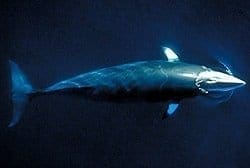 I and other Plankton Forums members got this form letter in response to an action letter sent through the Whale and Dolphin Conservation Society website. What this letter says to me is that Iceland’s policy makers put their hands over their ears and chant “la la la la… I can’t hear you….” in response to pleas from environmentalists to stop commercial whaling. They, like Japan, claim their whaling activities are in the name of “science” — I have another name for their letter and their whaling activities. I won’t repeat it here as it’s not appropriate language to use in this blog.

I truly don’t understand Iceland and Japan’s insistence on commercial whaling given that the market for whale meat is reportedly weak.

Here is the letter:

Thank you for your correspondence concerning Iceland’s policy on whaling.

I wish to assure you that Iceland has no intention of catching any of the endangered species of whales, killed on a large scale by other whaling nations in the past. Iceland’s resumption of sustainable whaling only involves abundant stocks and is linked to Iceland’s overall policy of sustainable utilisation of marine resources.

Several countries catch whales, most of them on a much bigger scale than Iceland. The biggest whaling countries among the members of the International Whaling Commission (IWC) are the United States, Russia, Norway, Japan and Greenland. The whaling operations practiced by all those countries, as well as Iceland, are sustainable and legal and in accordance with the rules of the IWC.

Iceland fully appreciates the need for careful conservation of marine resources. Our economy depends on those resources as marine products constitute around 60% of Iceland’s revenue from exported goods and almost 40% of all Icelandic exported goods and services. Disruption of the ecological balance in Icelandic waters due to overfishing or other reasons could have catastrophic consequences for the livelihood of Icelanders.

As you may know, Iceland was among the first countries in the world to extend its fishery limits to 200 nautical miles in the year 1975, in order to put an end to the uncontrolled fishing around Iceland by trawlers from other countries. Since then Iceland has taken great care in maintaining balanced and sustainable fishing in Icelandic waters by enforcing an effective management system for various fish species including cod, herring and capelin.

Iceland takes pride in its pioneering work in this field, which has been emulated by many countries in the world wishing to avoid unsustainable practices. The annual catch quotas for fishing and whaling are based on recommendations by scientists, who regularly monitor the status of the stocks, thus ensuring that the activity is sustainable.

For a number of years, Iceland has acknowledged the need for scientific research on whales to gain a better understanding of the interaction between the different whale stocks and other marine species and the role of whales in the marine ecosystem. Therefore, Iceland began implementing a research plan on minke whales in 2003. So far, 161 minke whales have been taken and we look forward to the completion of the research plan in 2007 when the sample size of 200 minke whales has been obtained. Whaling quotas will take into account the number of whales that are taken in the implementation of the research plan, ensuring that the total number remains well below sustainable levels.

There are many different whale species and stocks in the world’s oceans. Some are in a poor state and in need of protection. However, many whale populations are far from being threatened or endangered. The total stock size of Central North-Atlantic minke whales, for example, is close to 70,000 animals. Of those, around 43,600 live in Icelandic coastal waters. Fin whales in the Central North Atlantic number around 25,800 animals. Both estimates have been agreed by consensus by the Scientific Committees of the International Whaling Commission (IWC) and the North-Atlantic Marine Mammal Commission (NAMMCO).

Iceland’s decision to resume sustainable whaling involves takes of 30 minke whales and nine fin whales, during the current fishing year which ends on 31 August 2007. This will bring the total catches of minke whales in Icelandic waters during this fishing year to 69, including the minke whales taken in completing the research plan. These takes equal less than 0.2% of the number of minke whales in Icelandic coastal waters, an even smaller fraction of the total stock, and less than 0.04% of fin whales in the Central North Atlantic. Both are considered to be close to pre-exploitation levels and estimated sustainable annual catch levels are 200 and 400 fin and minke whales respectively. As the catch limits now issued are much lower, the catches will not have a significant impact on whale stocks. A responsible management system will ensure that the catch quotas set will not be exceeded. The catches are clearly sustainable and therefore consistent with the principle of sustainable development.

At the IWC’s Annual Meeting in 2005, Iceland went on record expressing its regret that no progress was being made in the RMS discussions. At this year’s IWC Annual Meeting, Iceland’s judgement of the situation was reconfirmed as the IWC generally agreed that talks on an RMS had reached an impasse. As a result, Iceland’s reservation has taken effect. Therefore, Iceland is no longer bound by the so-called moratorium on commercial whaling. In this respect, Iceland is in the same position as other IWC members that are not bound by the moratorium.

Iceland was one of the first countries in the world to realize the importance of a conservation approach to whaling. As signs of overexploitation of whales emerged early in the last century, Iceland declared a ban on whaling for large whales around Iceland in 1915. Whaling was not resumed until 1948, except for limited catches 1935-1939. Strict rules and limitations were applied to whaling in Iceland from 1948 to 1985 when all commercial whaling was halted again following a decision by the IWC.

Iceland has been a leading advocate for international cooperation in ensuring sustainable use of living marine resources, including whales. This has been the position taken by Iceland within the IWC, based on the International Convention for the Regulation of Whaling from 1946. The stated role of the IWC, according to its founding Convention, is to provide for the proper conservation of whale stocks and thus make possible the orderly development of the whaling industry.

I hope that this information will be useful to you in understanding Iceland’s position on sustainable whaling. You may rest assured, that the desire to ensure the conservation of the whale stocks around Iceland and elsewhere is fully shared by the Icelandic Government.