Race to the bottom of the sea… part 2 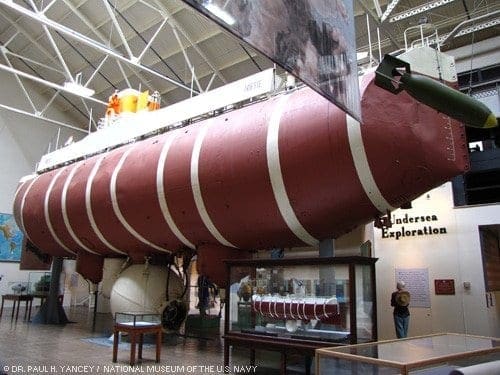 So I should probably begin with part 1…. Back in 1960, January 23rd to be precise, the first ever deep submersible dive occurred by two oceanographers, Don Walsh and Jacques Picard. Using the Bathyscaphe Trieste (above) they reached a depth of 10,911 m (35,797 ft) at the Challenger Deep section of the Mariana Trench, the deepest part of the ocean (11 km or about 7 miles deep). This so far, is still the only time this depth has ever been reached in the ocean by humans with it taking the Trieste five hours to reach the bottom and only being allowed 20 minutes at this depth due to the constraints of technology at the time.

Now for part 2…. 50 years on and a second attempt is being made. Over the next year, four different organizations with different types of submersibles will attempt to again reach the bottom of the Mariana Trench. One of the four subs, the “Triton” is planning on eventually selling tickets to the general public to allow everyone the privilege of traveling to the bottom of the ocean. However, these tickets come at a steep price, $250,000 per seat. For more information on the types of subs being used check out Race to the bottom of the ocean. Only one will be crowned as a winner!

There are many reasons for attempting the race to the bottom of the sea. It is not exactly known what’s down there or how organisms are surviving. Upon the first attempt they only saw one fish as detailed by Don Walsh in a recent interview. Finding out more about that environment and how it will cope with environmental change and how we effect it (through our pollution, mining or drilling…) is vital. There are just so many unanswered questions about this environment! More people have been into space than have been to the bottom of the sea and more is known about the surface of the moon than what lurks in the deep on Planet Ocean!

With the advancement in technology since the initial trip and all the sampling methods used to investigate this environment, I am surprised this has not been attempted sooner. However, I am glad that it is being attempted once again. I wish good luck to the four groups attempting this amazing feat and I will eagerly be waiting to see the video footage!