Penguins = canaries in the coal mine 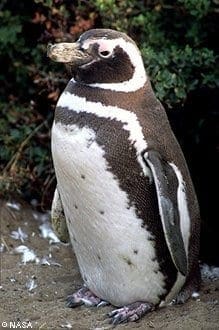 I always loved the song “Canary in a Coal Mine” by the Police:

Now the first line of the song and the comparison of penguins to canaries in coal mines is disturbing. Are we going to be a generation remembered for celebrating penguins in films like “March of the Penguins” and “Happy Feet” only to be the generation that announces their extinction? I hope not. It would be a tragic loss to the animal kingdom and to mankind.

This story in the Seattle Post-Intelligencer by Claire Trageser describes the plight of the penguins:

Dee Boersma and her team of students hadn’t been in the Argentine penguin colony very long before they made a new friend.

A young penguin had lost his nest in a fight, so he decided the space under Boersma’s turbo-powered Ford truck would make a good alternative home.

Boersma, a biology professor at University of Washington, tagged the bird with a number. She also gave him a different kind of name — Turbo — after his new home.

“The next year, he was more and more friendly,” said Olivia Kane, a UW graduate who now volunteers for Boersma. “He would come knock on our door with his bill. He would follow us when we went to work, and we’d say, ‘Go home, save your fat!’ ”

But for Boersma, Turbo and the 200,000 other Magellanic penguins from the Punta Tombo colony on the Atlantic coast of Argentina are far more than new friends. They have become the canaries in the global warming “coal mine,” signaling the effects of climate change on oceans through their rapidly declining population.

“What penguins are telling us now is that we’re seeing substantial changes in the marine environment,” Boersma said. “That’s a big concern.”

Just like the penguins, Boersma has visited the colony every year for the past 25 years. Since 1987, she and her students have counted the number of penguin nests to measure the population trends of the colony.

The news isn’t good. Boersma said she’s seen an almost 22 percent decline in nests and estimates that the overall population has been cut in half. Her findings were published in the latest edition of the journal BioScience, released Tuesday.

The Magellanic birds aren’t the only penguins that are suffering, Boersma said. Galapagos penguin populations have decreased by 75 percent since the 1970s, and scientists say they have a 31 percent chance of extinction in the next 100 years.

In 2006, Boersma visited an Emperor penguin colony in Antarctica, the site of the movie “March of the Penguins.” She watched as a storm broke up their iceberg nesting area, forcing the chicks into the water before they had grown enough insulation to survive.

These population dips aren’t natural, Boersma said. Instead, she said, oil pollution, fishing and the warmer climate are to blame, turning penguins into an indication of how human activity can disrupt the global balance.

“I’m not interested in arguing about climate change, but there is general agreement among scientists that we’ve already seen the pattern of climate change, and what I’m saying is that penguins are also signaling that same thing,” she said.

Boersma hopes that her research will draw attention to the penguin problem before it’s too late. She cites an ever-growing human population as the root of the threat to penguins. When asked recently about her greatest accomplishment, she said it was “having no biological children.”

“Most people say their great accomplishment is having two children, or four or six, but it’s at the expense of the rest of what we want to have in the world,” she said. “If we don’t get a handle on reducing human consumption and population, we’re not going to have the other species I want to see in the world.”

Her other hope is that penguins’ popularity will draw people to their cause. More than 100,000 people visit the Punta Tombo colony each year, but Boersma said none of the money they pay goes towards penguin conservation. She would also like to start an international organization to track the population of each penguin species, since some colonies are so remote problems can go unnoticed.

With increased awareness, Boersma believes the penguins can survive.

“These trends can change if enough people care about the penguins, are willing to support their conservation efforts, and maybe call up their government or ask the U.N. to support it,” she said.