Out of Africa – back to reality 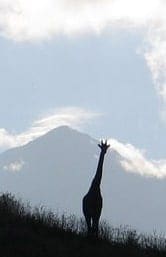 So in case you’re wondering why MarineBio’s blog seems to have been neglected, it’s because I was in Tanzania. Though I was there for a meeting, I did take a day to explore Tanzania’s beautiful scenery and wild life. From the windows of our Toyota Camry-like car, we saw — zebras, giraffes, warthogs (so ugly they’re cute), buffalo, baboons, gazelles… all in a span of a quick 2-hour tour of the Arusha National Park. I was thinking about how cool I was for going on “safari” (seriously finger quoting here) in a fuel-efficient vehicle instead of a gas-guzzling 4-wheel drive SUV — safari utility vehicle. Ok, ok I’ll stop — it’s just that I really resented being in such an amazing place for a meeting and having to rush back to the US without enjoying more than 2-hours of the fantastic wild life there. I also wanted to see the Masai — a semi-nomadic pastoral tribe of Kenya and Tanzania. Though they’re increasingly becoming assimilated into the modern world, these amazing people live very close to the earth. Though I appreciate what I have available in the high-tech, modern western world, I also appreciate cultures who live simply and don’t contribute much to problems like global warming, pollution, etc. They only use what they need, that’s amazing to me as an American who’s human footprint is large.

So what does all this have to do with marine biology?! Well, the diving is great off the coast of Tanzania… but I missed that too. Feeling all nature-y I decided to watch natural history documentaries on the plane on the way back. One of the options was a film called “The Great Global Warming Scandal,” which dismisses human activity as the cause of global warming. No, I didn’t watch it. I’m convinced human activity is the cause. So I came home and watched Al Gore’s latest presentation on TED (technology, entertainment, design). If you haven’t visited this website, which feature talks from some of the world’s greatest minds – stop reading this blog and RUN (CLICK!). It’s amazing. And watch Al Gore’s new talk on global warming first (premiered exclusively on TED). It too, is amazing. Well presented, based on the latest science and hard facts. Described on the TED site: “he presents evidence that the pace of climate change may be even worse than scientists were recently predicting, and challenges us to act with a sense of “generational mission” — the kind of feeling that brought forth the civil rights movement — to set it right. Gore’s stirring presentation is followed by a brief Q&A in which he is asked for his verdict on the current political candidates’ climate policies and on what role he himself might play in future.”

The truth is that we are the cause of global warming. We’re also the only solution. We may not be able to go back to living like the Masai, but we can cut our emissions drastically and we can remove carbon dioxide from our atmosphere. And we simply must.