Temperature and density share an inverse relationship. As temperature increases, the space between water molecules increases—also known as density, which therefore decreases.

If the temperature of water decreases its density increases, but only to a point.

At a temperature of 4° C pure water reaches its maximum or peak density, cooled further it expands and becomes less dense than the surrounding water which is why when water freezes at 0° C it floats.

Salinity and density share a positive relationship. As density increases, the amount of salts in the water—also known as salinity, increases. Various events can contribute to change in the density of seawater. 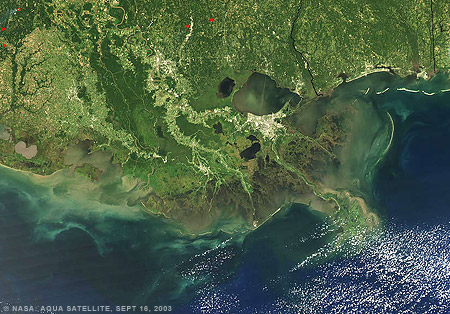 The ocean water is constantly churning underneath, bringing nutrients up to the top. The difference in density of cold water versus density of warmer water is responsible for ocean currents and upwelling. Warm seawater floats and cold (4° C), dense (1 g/cm3), seawater sinks, so ocean temperatures also vary across the surface and into the depths.

Seawater is saturated with salts at 35 ppt and at 4° C the salinity causes the density to actually be 1.0278 g/cm3. This slightly heavier density is another contributing factor to upwelling as it causes the water molecules to roll over each other.

Temperatures range from -2° C to 28° C in most cases, but are hotter near hydrothermal vents or closer to land. Salinity is usually 35 ppt (parts per thousand), but can range from 28-41 ppt and is highest in the northern Red Sea. 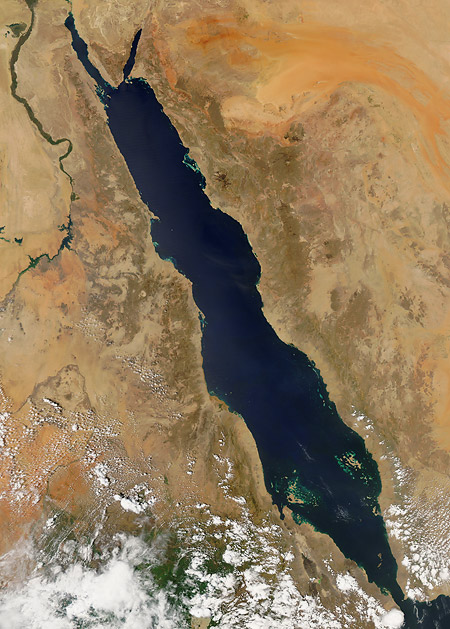 Thermoclines occur a short distance offshore when the shallow surface water is heated by the sun, resulting in warm, less dense, water staying at the surface and the sinking of cold, dense water. A seasonal thermocline is formed when surface water is cooled, and sinks to the bottom resulting in a mixing of the layers. The approaching cool weather impacts primary production in the euphotic zone by cooling the surface water and bringing phytoplankton with nutrients to the creatures below. Shorter days and lower angles of sunlight limit the growth rate of the phytoplankton, which in turn limits the primary production and growth rate of organisms higher on the food chain. 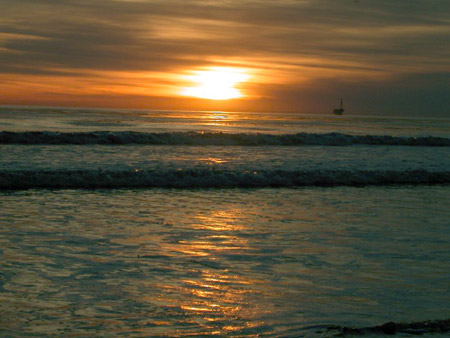 A new thermocline is created in the spring when the increase in sunlight results in less mixing and a “bloom” in phytoplankton. The waters turn from blue to green as the increase in the number of phytoplankton dissolving inorganic nutrients causes an increase in chlorophyll biomass. Herbivorous zooplankton biomass also begins to increase, providing food for an entire food web above that depend on the energy they provide. 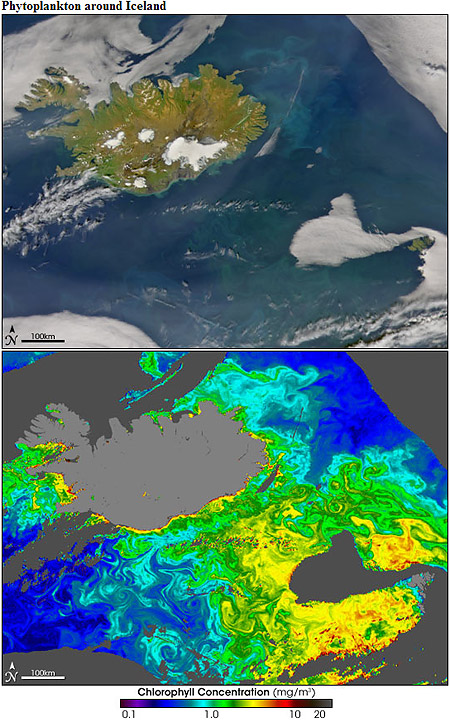 During the summer, the phytoplankton absorb most of the dissolved inorganic nutrients from the surface waters and are consumed by the zooplankton, decreasing the rate of photosynthesis. Vertical mixing ceases and phytoplankton, which remain in the upper layers, become nutrient-limited. The cycle starts all over in the fall when the surface water cools, churning the deeper, nutrient-rich waters into the depleted surface waters. Nutrients become available again and the phytoplankton blooms in great quantity during the spring after the intense winter mixing. Fall and summer are the least plentiful months due to the less active summer waters.

The seasonal cycle of phytoplankton growth is an amazing demonstration of the complex and interwoven physical, chemical and biological processes of the ocean. Dr. Sean Chamberlin has described this phenomenon in the following paragraph:

Thermohaline circulation simply refers to global density-driven circulation of the oceans. Heat (thermo), and haline (density) are the two main factors determining the density of seawater. As you may remember, temperature and density share an inverse relationship so when the surface currents (i.e. the Gulf Stream) flow towards the poles from the equatorial Atlantic Ocean, they are cooled and flow downhill into deep water basins forming the North Atlantic Deep Water. These currents resurface in the northeast Pacific Ocean 1,200 years later. Ocean water from all of the ocean basins mixes thoroughly, carrying heat energy and matter in the form of solids and gases, making Earth’s ocean a global system. As you can see, the state of this thermohaline circulation, sometimes called the global conveyor belt, can have an enormous impact on the climate of our planet. 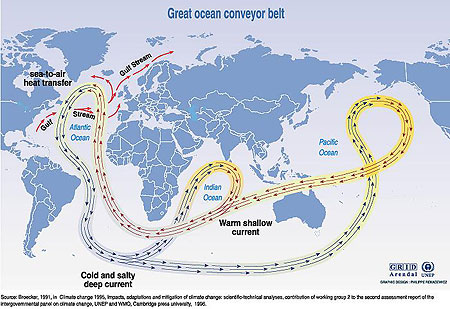 The deep ocean, devoid of wind, was assumed to be perfectly static by early oceanographers. However, it has been found with modern instrumentation that movement in deep water masses is frequent. In contrast to the wind over land, the major driving forces of ocean currents are differences in density and temperature.

The density of ocean water is not the same throughout and there are sharply defined boundaries between water masses which form at the surface of the ocean. They are positioned one above or below each other according to their density. In order for lighter water masses to float over denser ones, they must flow into position. The shuffling of layers into their most stable positions provides a driving force for deeper currents.

Formation of the deep water masses

The cold, dense water masses that sink into deep basins are formed in the North Atlantic and the Southern Ocean. Seawater is cooled by the wind and the salinity of the water increases due to the salt fraction of the water being left behind when the ice forms. Extremely dense brine is formed in ice pockets similar to a honeycomb. The brine drips down slowly through the honeycomb matrix and sinks to the sea bottom, flowing downhill through the bottom topography like a stream in the ocean to fill up the polar sea basins.

The cooling effect of the wind is a major factor in the Norwegian Sea and the North Atlantic Deep Water (NADW), where cold dense water fills the basin and spills southwards through crevasses that connect Greenland, Iceland and Britain.

In contrast, in the Weddell Sea located north of Antarctica near the edge of the ice pack, the effect of wind cooling becomes more intense with the exclusion of the brine. The result is the sinking and northward flow of the Antarctic Bottom Water (AABW)—seawater so dense it actually flows underneath the NADW.

The North Atlantic Deep Water, is the result of density variation in the North Atlantic and is not a static mass of water like once thought, but instead a slowly southward flowing current. The route of the deep water flow is through the Atlantic Basin around South Africa and into the Indian Ocean and on past Australia into the Pacific Ocean Basin. Flow into the Pacific is blocked for both the AABW and the NADW, so the NADW flows very slowly into the deep abyssal plains of the Atlantic always in a southerly direction and the AABW also flows away from the road block. In the case of the AABW, the blockage is the Drake Passage, located between the Antarctic Peninsula and the southernmost tip of South America.

With all the dense water masses sinking in the ocean basins, the original water is moved upwards to keep a balance. Although thermohaline upwelling is a major factor causing ocean currents, it is also a very slow process, even when compared to the movement of bottom water masses. With all of the wind-driven processes going on simultaneously, it can be very complicated to determine where upwelling occurs just by using current speeds. So instead, we have to look at the breakdown of particulate matter that falls into the basins over their long journey, a sort of chemical signature. By analyzing the chemical and isotopic ratio signatures, the flow rate and age of the deep water masses can be determined. This signature tells us that the surface waters of the North Pacific is where most upwelling occurs.

Thermohaline circulation is responsible for much of the distribution of heat energy from the equatorial oceans to the polar regions of the ocean. It is also the return flow of the sea water from the surface North Atlantic Drift and Gulf Stream currents.

Interestingly, the melting of the Greenland ice sheet is suspected to be the cause of a major disruption in the deep water formation and variation in the North Atlantic, previously causing an entire climatic period in Europe known as the Younger Dryas.