The open ocean, or pelagic zone, consists of everything in the ocean outside of coastal areas.

The demersal zone is everything in the ocean near the sea floor or the coast.

Separated into epipelagic, mesopelagic, bathypelagic, abyssopelagic and hadopelagic subzones, areas in the pelagic zone are distinguished by their depth and the ecology of the zone. The epipelagic zone is closest to the surface and stretches down 200 m. An abundance of light allows for photosynthesis by plants and nutrients for animals like tuna and sharks. The mesopelagic zone, also known as the twilight zone, begins at 200 m down and reaches a depth of 1,000 m and has a little light but not enough for photosynthesis to occur. The bathypelagic zone follows from 1000-4,000 m in depth, a subzone containing the infrequent bioluminescent organism. Unique animals like the marine hatchet fish and giant squid live in this subzone, surviving mostly on the detritus that drifts down from the epipelagic zone. The abyssopelagic zone is located from 4,000 m to directly above the ocean floor and is a completely dark area home to colorless and blind animals. The deepest subzone is the hadopelagic zone, a name that originates from the Greek underworld Hades and refers to the ocean water in submarine trenches.

Marine biologist Tierney Thys asks us to step into the water to visit the world of the Mola mola, or giant ocean sunfish. Basking, eating jellyfish and getting massages, this behemoth offers clues to life in the open sea.

Scientists generally classify the epipelagic and mesopelagic zones into what is known as the photic zone – or where light penetrates the water. Anything below the photic zone is referred to as the aphotic zone.

Animals of the Epipelagic Zone

The zone best known to humans is where people can easily go scuba diving and many marine mammals are found. This area is packed with ocean life because of the sunlight that penetrates the surface. Much of the life in the aphotic zone (little to no sunlight) depends on detritus floating down from the epipelagic zone. Animals of the Mesopelagic Zone

Known as the twilight zone, the mesopelagic zone meets the photic zone above and becomes very dark as depth increases. Animals that produce bioluminescence, or light, inhabit this subzone. Because nutrients are limited here, some animals rise to the photic zone at night for food. Many animals in this subzone can eat animals larger than themselves because they are equipped with large sharp teeth with expandable jaws and stomachs. Animals in the mesopelagic zone include the bigscale fish which lives in the depths between 150-1,000 m, an animal with oversized scales and bony plated head. Similar to other fish in this zone, the bigscale relies on specially developed lures to catch its prey off guard and to save energy in a nutrient poor subzone. The ctenophore is a relative of the jellyfish and is also a bioluminescent organism and has adapted its iridescent cilia, used for locomotion, to scare away its predators. Ctenophores come in many forms and typically capture crustaceans and fish with long tentacles. A more complicated bioluminescent organism is the Firefly squid, an animal with one photophore on its head, another around the eyes, one on the body surface and the remaining one on the tips of its tentacles. Possible uses for the photophores are predator deterrence, communication, lures for prey and a flashlight to see in the dark when hunting.

The hatchetfish looks frightening but it is only a few inches long with a huge jaw and long teeth. With photophores underneath their body and under their eyes, it is thought that this fish may also be hiding its silhouette so that it’s invisible to predators swimming below. Dragonfish and viperfish are very similar in that they both have an enormous mouth, sharp pointy teeth, big eyes, and large stomachs. They are thought to swim up at night to hunt. Both species have been found hunting in the deep sea and in surface waters with their bioluminescent lures. 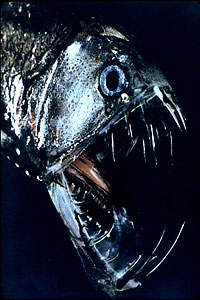 Adult snipe eels look like a long piece of silly putty stretched out with a flat little head at one end. The jaws of the snipe eel curve out to trap shrimp antennae in the teeth. Also present in the mesopelagic zone are siphonophores, animals related to the jellyfish that stun their prey with a special tentacle. Siphonophores can also form a gas-filled float.

Animals of the Bathypelagic Zone

Animals living in the bathypelagic zone rely on detritus for food or on eating other animals in this zone. At this depth and pressure, the animals most commonly found are fish, mollusks, crustaceans, and jellyfish. Sperm whales will hunt at these depths on occasion to prey on giant squid. Black and red are the predominant colors of animals here and any bioluminescence is usually blue since red is not visible at these depths. The most common mollusk in the bathypelagic zone is the vampire squid, an animal that can turn itself inside-out to use its spiky tentacles to deter predators or capture prey. The tentacles are often thrown over prey like a net from above. The snake dragonfish resembles the viperfish or dragonfish of the mesopelagic zone and also comes up to hunt at night but has to travel further as it lives in deeper water than the others. The anglerfish of the bathypelagic zone is well known for its enormous mouth and a lure that resembles a flashlight on its head. Not only does the angler fish have huge long teeth on the jaws, it is also equipped with teeth in its throat! Males of this species are found in the form of a tiny parasitic fish carried by the female near her genitals. Both sexes can be found anywhere from the surface to the deepest waters.

Amphipods are crustaceans and scavengers in the bathypelagic zone that hide using a transparent red body. Other crustaceans found in the bathypelagic zone include shrimp. Echinoderms seem to do well in deep ocean water, although they are not usually found in the open ocean. They survive by scouting out detritus on the ocean floor or by swimming through the water hunting for floating food. Slime stars are in the echinoderm family and can reach up to 21 cm in length—large for an echinoderm.

Animals of the Abyssopelagic Zone 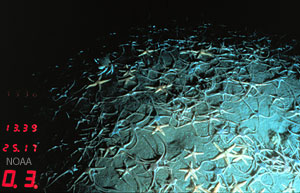 There are only a few organisms adapted to survive in the abyssopelagic zone, a subzone located from 4,000 m to the bottom with freezing temperatures and incredible pressures. Deeper than the abyssopelagic zone are the canyons and submarine trenches of the hadopelagic zone. Animals capable of living at these depths include some species of squid, such as the deep-water squid, and octopus. As an adaptation to the aphotic environment, the deep-sea squid is transparent and also uses photophores to lure prey and deter predators. Other animals of the abyssopelagic zone include basket stars, seapigs, and seaspiders. Basket stars are echinoderms with an arm span larger than 25 cm living on the ocean floor or on another animal, feeding on detritus floating down from above. Like many echinoderms, the loss of a limb is not a big deal since they will grow back. The seapig is another echinoderm that looks like an ugly sea cucumber and can eat mud like an earthworm. Some echinoderms, like the swimming cucumber, use wing-like structures to swim as if they were flying through the water. The sea spider is a crustacean and actually resembles a spider walking on the ocean floor. The sea spider has a hose-shaped mouth and eats anemones and echinoderms. Its leg span reaches 30 cm or larger. Other crustaceans living at these depths have adapted by becoming transparent and have evolved without eyes because they serve no purpose at these depths.

See more about the Deep Sea »