Ocean currents are a continuous directed flow of ocean water capable of traveling thousands of kilometers.

Surface currents move water at the surface of the ocean, while submarine river currents flow deep below.

Ocean currents can significantly influence the climate of coastal areas. The Gulf Stream, for example, makes northwest Europe the most temperate of any region at that latitude. The California current in the Hawaiian Islands results in a climate much cooler than other tropical latitudes. El Niño is a phenomenon where an ocean current is reversed, resulting in devastating climate changes from the west coast of South America all the way to Australia. Ocean currents also impact the life cycles of certain marine creatures, such as eels, which relocate thousands of kilometers to spawn based on ocean currents.

The ocean’s surface rises and falls predictably due to changes in gravitational forces originating from the Moon and the Sun. These changes in ocean surface level are known as tides and are evidence of the influence celestial bodies have on our planet. Without these external forces, the ocean’s surface would simply exist as a geopotential surface or geoid, where the water is pulled by gravity without currents or tides. The strong gravitational fields of the Moon and the Sun result in significant changing gravitational fields causing tides to rise and fall. Because the Sun is farther away than the Moon, the Sun’s pull on the tides is about 40% as strong as the Moon’s. Both gravitational and tidal forces weaken as distance increases. Gravitational forces are inverse to the square of the distance and tidal forces are inverse to the cube of the distance.

Both the Earth and the Moon revolve around the one center of both of their masses. This common point is called the barycenter and is located at about ¾ of the radius from the Earth’s center. Although the Moon is the Earth’s only satellite, the Earth moves slightly when they both orbit the barycenter. In addition, the barycenter is not always in the same place due to the elliptical rotation of the Moon. There is one revolution of the Moon every 27 days, so the angular velocity is the same at all places and the centrifugal force lines up with the radius from the barycenter. The effects of the Moon on the Earth have mostly to do with the ocean, since in contrast to the crust which moves as a whole, each ocean particle is free to be pulled by gravity as a liquid. Tidal force is determined by the difference in forces at the Earth’s center and surface. Net forces below and above the Earth are equal and point away from the center.

Gravitational pull of the Moon is stronger near the moon and weaker away from the Moon. The pull also varies slightly (only inversely quadratic in contrast to the cube or square) across the Earth’s radius due to differences between center and surface. 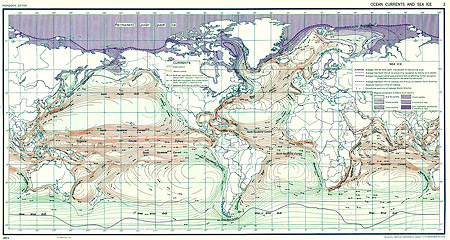 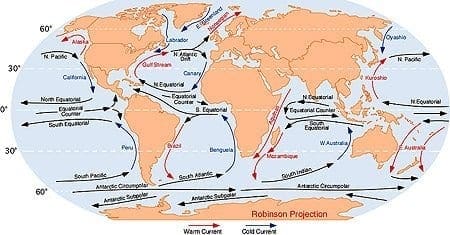 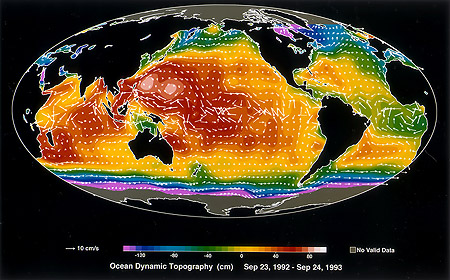 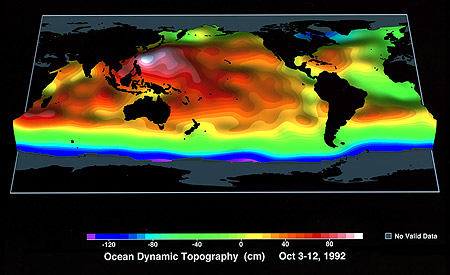 Since the earth rotates relative to the moon in one lunar day (24 hours, 48 minutes), each of the two bulges travel around at that speed, leading to two high tides and two low tides each day with high tides occurring 12 hours and 24 minutes apart. Another way to look at it is that 12 hours is half of a solar day and 24 minutes is half of a lunar extension. Two high tides occur simultaneously; one high tide comes from the ocean being pulled by the moon’s gravity and the other resulting from the inertia of the ocean water in orbit and that the center of the Earth is pulled towards the barycenter, leaving the ocean dragging behind.

Other important celestial behavior affecting tide heights is the relative distance of the Moon from the Earth. At perigee, the Moon causes the range to increase, while at apogee the range is diminished. Surfers wait for the spectacular waves that occur every 7 1/4 cycles because at this time perigee and either a new or full Moon coincide causing the most drastic range of tide heights. With the addition of a storm rolling in, the waves can cause severe damage or provide for really exciting surfing experiences.

Tidal lag is a somewhat gray area in the predictability of tides. It’s caused by the fact that forces on the tides can take time to have a noticeable effect. The Moon’s tidal forces have a 12.42 hour period, which is half of the Earth’s synodic period of rotation and the resulting complex resonance that occurs is the culprit for the average 6 hour tidal lag. The result of the tidal lag is that low tide often occurs when the Moon is at its Zenith or its nadir, which is opposite of what one may expect. Tidal acceleration, the process of the Earth’s movement being slowed down and the Moon being moved farther away is another interesting phenomena resulting from tidal lag and the transfer of momentum between sea and land.

Tides originate in the southern oceans, the only place on Earth where a circumventing wave resulting from the tidal force of the Moon can travel with no restrictions from land barriers. The result is that in most places there are delays between phases of the Moon and effects on the tide. For example, spring and neaps are two days behind the new/full moon and first/third quarter in the North Sea.

Tides are actually standing waves that travel northwards over the Atlantic. A standing wave is a type of wave produced when two waves of identical frequency interfere with each other while traveling in opposite directions. At various points of a standing wave two waves will constructively or destructively interfere (meaning that they add up amplitude or completely destroy amplitude resulting in a node). The activity of the standing wave results in relatively low tidal ranges in some locations and high ranges in other locations.

Using only the effects of celestial bodies on the tides, it would be calculated that the amplitude of oceanic tide at the equator is about one meter. This value is inaccurate because of the enormous influence of factors like global topography and the period of the oceans being 30 hours (a function of terrestrial gravity and average ocean depth), a large value in comparison to the 57 minute period of the Earth’s crust. It has been theorized that if the Moon vanished, ocean levels would continue to oscillate for 30 hours until all of the stored energy was depleted.

The local geography has a lot to do with the exact time and height of a tide in a particular location. One particularly remarkable tidal range is the 16 m (or 53 foot) tidal range found in the Bay of Fundy on the east coast of Canada. In this case, the shape of the bay influences the extreme variation in tides. Although it was noted in folklore that a giant whale splashing around caused this immense variation, oceanographers think it results from waves entering the mouth of the bay and then bouncing back, creating a standing wave. Other interesting examples are Southampton in the UK, which has a double high tide due to the Isle of Wight, and Dorset which has a double low tide due to the Isle of Portland. In contrast, extremely small tides occur in the Mediterranean and the Gulf of Mexico due to a very narrow connection with the ocean. A very small tide occurs on the southern coast of Australia due to the very open ocean and a lack of any deep indentation to create interference in the coast.

For accurate navigation of the ocean, tidal flows must be taken into account. Of great importance are tidal heights, which due to the shallow bar at the entrance, can completely prevent a boat from entering harbor at their lowest points. Tidal charts come in sets, with each set covering the hour between one high tide and the other, ignoring the extra 24 minutes. These charts, when used for the area to be traveled, are useful in that they give the average tidal flow for that one hour. Information found on a tidal chart consists of direction and average flow in knots for spring and neap tides.

An alternative to the tidal chart are the tidal diamonds found on most nautical charts, which relate certain points on the chart to a table that will also give direction and speed of tidal flow. A dead reckoning position is calculated along with the direction of travel and these values are marked on the chart. Then a line is drawn from the dead reckoning position in the direction of the tide. An estimated position, marked with a dot in a triangle, can be calculated by measuring the distance the tide will have moved the vessel along this line.

Due to the many meteorological factors that may influence tides, a depth marking at the lowest possible astronomical tide can be very useful and can be obtained from any nautical chart. Other good information includes heights and times of low and high tide each day and these can be found in tide tables. Using the tide tables and charts together, actual water depth at these times can be calculated. Each port has its own tidal curves to help calculate depths for intervening times. The rule of twelfths can also be used and is simply a way to approximate depth based on the observation that depth in the six hours between low and high tide will increase as follows: first hour- 1/12, second hour- 2/12, third hour- 3/12 and so on until six hours as passed. As a note of caution, the rule of twelfths is only an approximation and should not be used in navigation without proper training.

Oceanic tides are not alone, there are also atmospheric tides and terrestrial or land tides that affect the Earth. Atmospheric tides are drowned out by the much more radical effects of weather and solar thermal tides. The Earth’s crust, rises and falls as if it were breathing due to the Moon’s pull. On average, terrestrial tides have an amplitude of 1.5 m at the equator and since they are only two hours behind the moon, they reinforce oceanic tides. In 1686, Isaac Newton became the first to give a mathematical explanation of tidal forces in the Philosophiae Naturalis Principia Mathematica. It is interesting to note there are several terms using the word “tide” that have nothing to do with tides. These include: tidal wave, rip tide, storm tide and hurricane tide.