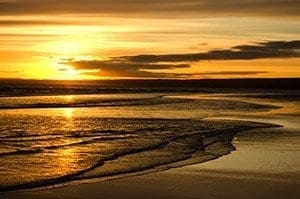 I wonder if they’ll rename it “Ocean Change” too…

New research published in the journal Nature Geoscience shows us that not only is global warming (aka Climate Change) increasing the acidity of the entire ocean (by forcing more CO2 into it) and increasing it’s temperature (which alone is forecasted to cause widespread shifts in habitats, changes in currents, oxygen levels, and sea level rise due to the thermal expansion of water itself…), we now find that a warming ocean also melts ice faster.

The researchers found that the ocean at depths between 200-500 meters will be warming between 0.5 and 2 °C by 2100. The range of temperature increases will be due to currents doing what they do at different places. The warming ocean will have the biggest effects on polar ice sheets, basically helping them melt faster than previously predicted:

“This does mean that both Greenland and Antarctica are probably going melt faster than the scientific community previously thought,” study researcher Jonathan Overpeck, also of the University of Arizona, said in a statement. “We could have sea level rise by the end of this century of around 1 meter [more than 3 feet] and a good deal more in succeeding centuries.”

Until now, sea level rise due to global warming was expected to be between 0.56 and 2 meters, and this year a study by Dr. Eric Rignot of the University of California at Irvine and others have predicted that sea level rise would reach 32 centimeters by 2050 alone. This new research study simply adds to the mountain of evidence already present concerning global warming. It also underscores the fact that most scientific predictions concerning the impacts of global warming have been conservative predictions (really).

Time to sell that beachfront property before you can’t give it away….