Instead of sporadic, expeditionary glimpses of the ocean from ships and subs, oceanographers would like to establish a permanent presence in the ocean. For a decade, researchers have been planning an infrastructure of long-term ocean-observing outposts that can transmit round-the-clock data from remote oceans to shore-based scientists. NSF’s Ocean Observatory Initiative would provide $309 million for new ocean observing systems and infrastructure over the next 10 years. For instance, researchers are planning instrument arrays that combine surface and sub-surface buoys, moorings, gliders, drifters, and shipboard measurements that can monitor many complementary ocean processes. (Illustration by E. Paul Oberlander and Jack Cook, Woods Hole Oceanographic Institution. Image courtesy of the OceanSITES program.) 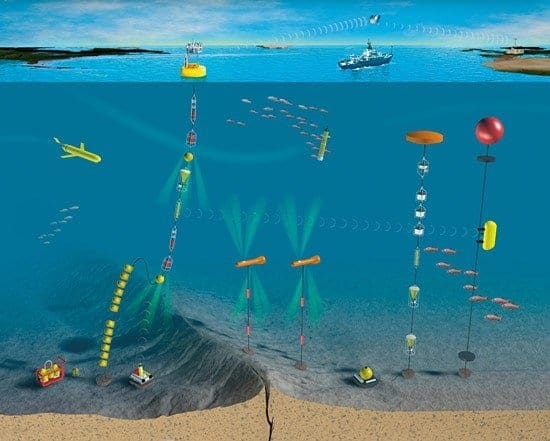 WASHINGTON — The Joint Oceanographic Institutions (JOI) has awarded a $97.7 million contract to an academic partnership led by the Woods Hole Oceanographic Institution (WHOI), to support the development, installation and initial operation of the coastal and global components of the National Science Foundation’s Ocean Observatories Initiative (OOI). The WHOI partnership includes Scripps Institution of Oceanography at the University of California, San Diego, and Oregon State University’s College of Oceanic and Atmospheric Sciences. This award completes the management team to construct and implement the $331.5 million OOI Network.“This initiative is a major investment that will transform our understanding of the ocean,” said JOI President Steven Bohlen. “It will contribute to tremendous advances in our understanding of how Earth works.”

The OOI Network spans global, regional and coastal scales, linked by a system-wide cyberinfrastructure. The award establishes WHOI and its partners from Scripps and OSU as the implementing organization for the coastal and global components of the OOI Network. Each partner will contribute scientific and engineering expertise to the development of a range of innovative moored buoys, cabled nodes, and autonomous vehicles that will provide users with data in real-time or near-real-time, and allow users to remotely control their instruments and construct virtual observatories specifically tailored to their scientific needs.

The initial 67-month contract is valued at $97.7 million and contains options for five years of operation and maintenance, which would bring total funding for WHOI and its partners to more than $200 million. Raytheon will provide project management and systems engineering support to WHOI, and industry partners Technip and Science Applications International Corporation (SAIC) will be assisting in the design of a high-performance moored platform for the OOI Network.

“By exploiting technological advances in the fields of in situ sensors, autonomous vehicles, and cyberinfrastructure, including telecommunications and networking, the OOI will revolutionize the way we conduct oceanography,” said Jim Luyten, President and Director of WHOI. “These systems will provide us the ability to continuously monitor the ocean over time and space.”

The WHOI-led team will design and deploy global buoys to address planetary-scale problems in critical high latitude locations in the Northern and Southern hemispheres. A major goal of the global observatory is to better understand and predict the impact of climate change on the interlinked ocean-atmosphere system, and on marine ecosystems, biodiversity and community structure, especially in remote, poorly sampled parts of the world’s ocean.

“The ability to make long-term measurements in the coastal and global ocean provides an opportunity to truly understand ocean variability, hazards, and climate change in response to natural events and human activity,” said Scripps Institution of Oceanography Director Tony Haymet.

Permanent and transportable arrays of buoys and autonomous vehicles will be deployed off the Pacific Northwest and Mid-Atlantic Bight (initially) to study coastal processes and to monitor changes in coastal systems. The aim of the coastal arrays is to understand complex coastal ecosystems and their critical role in the ecology and biogeochemistry of the world’s oceans, coastal hazards such as storms and harmful algal blooms, and the impact of climate change on the coastal ocean.

“By providing real-time, continuous access to the sea through the Internet, the OOI will transform ocean research and education,” said Mark Abbott, Dean of OSU/COAS. “No longer will ocean exploration and research be limited to scientists; everyone with a connection to the web — including students, teachers, decision makers and the general public — will be able to have access to these undersea networks.”

JOI published the OOI’s Conceptual Network Design, developed with input from the research community, in August 2006; a modified version of this plan was distributed in March 2007. In May 2007, JOI announced awards to the University of Washington and the University of California, San Diego, to lead OOI’s regional and cyberinfrastructure components, respectively. Each partner will contribute to JOI’s ongoing development of the preliminary design in preparation for a review scheduled for late 2007. OOI is the U.S. science community’s contribution to a broader national and international effort to establish a Global Ocean Observing System (GOOS).

JOI is a consortium of premier oceanographic research institutions that serves the U.S. scientific community through management of large-scale, global research programs in the fields of marine geology and geophysics and oceanography. Known for leadership of U.S. scientific ocean drilling and ocean observing initiatives, JOI has helped facilitate discovery and advance global understanding of the Earth and its oceans through effective systems engineering and program management.