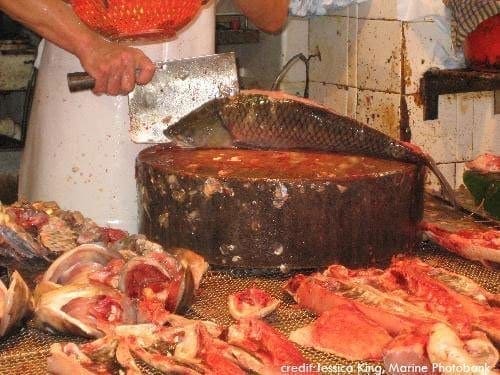 This is a great numeric illustration of the 2048 article from yesterday’s post about the impact of marine species loss:

2048: The estimated date at which stocks of commercial fishing species will collapse due to overfishing. “Biodiversity is a finite resource,” says Professor Boris Worm, who led the Dalhousie study. “We can predict when we are going to run out of species.”

29: The percentage of seafood species that have collapsed (i.e. their catch has declined by 90 percent or more) in the last 50 years.

13: The percentage decline in global fishing yields since 1994.

4.2: The average per capita consumption (in lbs) of shrimp in the U.S.

48: The numbers of marine areas worldwide that are officially protected to prevent over-fishing. These areas have, according to the Dalhousie report, seen “dramatic” improvement in biodiversity and regeneration of fish stocks.

23: The percentage increase in biodiversity witnessed in the protected areas above.

1: The percentage area of the world’s oceans that is currently protected against over-fishing.

80 billion: The annual worth, in dollars, of the worldwide fishing industry.

200 million: The number of people worldwide who are dependent on fishing for their livelihood.

1 billion: The number of people worldwide for whom fish is the main source of protein.

64: Number of Large Marine Ecosystems in the world. LMEs are regions of ocean around the coastlines of the world’s continents. They account for over 90 percent of the world’s fish catch.