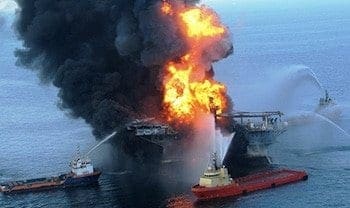 So David suggested that I blog about topics that are a bit, meatier, than say… reusable bags. I love those bags! Particularly after stuffing my pockets with water-inflated plastic bags and other jetsam and flotsam in a remote sea in Indonesia. And, I get excited when I see companies doing something good for the planet.

So here’s a more serious issue creating a domino effect of problems: the price of oil. Yes, mostly in the US where we’ve been sheltered from paying extortionate amounts for fuel. But why are we paying those prices? Partly because of speculators. More on that below. But first, another reason I’m posting on this topic is that, though I’m partly glad that increasing fuel prices are opening up consumers eyes to the need for alternative fuels, I’m also concerned that the US economy is in a tailspin, which will impact the environment indirectly. How? Offshore oil rigs pose a threat to the marine environment with spills, toxic chemicals, habitat destruction, etc. And fundraising for environmental causes was tough before the problems with the US economy, I’m afraid soon it will be impossible. The Bush administration keeps screaming for offshore drilling to solve our economic woes. It won’t. It’s a scam. This editorial in the New York Times titled “The Big Pander to Big Oil” sums it up perfectly. And one of our favorite marine conservation authors and activists, David Helvarg of Blue Frontier Campaign said in an interview:

And again, McCain, the other day, said there was no spillage from the—he parsed it very carefully—from the 160 offshore rigs that were either damaged or destroyed. I saw them up on beaches. I also talked to the Coast Guard. There was actually 8.2 million gallons of spillage. The rigs themselves were closed down and evacuated before the storm, but all the pipes and tank farms and the infrastructure you get around that created two-thirds of an Exxon Valdez.

I mean, the problem is that, you know, they’re looking at drilling offshore. They’re drilling in Bristol Bay, Alaska. The use of fossil fuels is literally melting away the Arctic ice cover, and there are going to be eighteen exploration ships, drilling ships, up there looking for oil this summer. You know, the rapid decline of ice in that area, the extreme weather events we’re experiencing, should be a signal for a global response. And unfortunately, at the moment, the global response we’re seeing is this kind of cold rush into the Arctic to look at mineral exploration, shipping lanes and even oil drilling.

I was alerted via an email from Delta Airlines in an open letter to travelers signed by the CEOs of 12 major airlines. The airlines are working together on fuel prices! They said:

Twenty years ago, 21 percent of oil contracts were purchased by speculators who trade oil on paper with no intention of ever taking delivery. Today, oil speculators purchase 66 percent of all oil futures contracts, and that reflects just the transactions that are known. Speculators buy up large amounts of oil and then sell it to each other again and again. A barrel of oil may trade 20-plus times before it is delivered and used; the price goes up with each trade and consumers pick up the final tab. Some market experts estimate that current prices reflect as much as $30 to $60 per barrel in unnecessary speculative costs.

Over seventy years ago, Congress established regulations to control excessive, largely unchecked market speculation and manipulation. However, over the past two decades, these regulatory limits have been weakened or removed. We believe that restoring and enforcing these limits, along with several other modest measures, will provide more disclosure, transparency and sound market oversight. Together, these reforms will help cool the over-heated oil market and permit the economy to prosper.

The nation needs to pull together to reform the oil markets and solve this growing problem. We need your help. Get more information and contact Congress by visiting StopOilSpeculationNow.com.

What is causing the high price of fuel?

The oil price bubble is unfairly taxing American families and restricting our nation’s economic potential. While everyone is aware that supply and demand constraints contribute to price increases, there’s another force at work that, like gravity, is invisible yet powerful. This force is rampant speculation.

Every time you buy products such as food or gas, you are impacted by unregulated, secretive and often foreign commodities futures markets. Speculators in these markets are increasingly buying and selling commodities such as oil to sell again, rather than to use. As largely unregulated speculators pocket billions of dollars at your expense, the price of commodities has increased out of proportion to marketplace demands.

As speculators continue to dominate the market, the volume of oil traded “on paper” has been as high as 22 times greater than the volume of oil consumed. As prices rise, institutional investors have become active traders, turning commodities into just another asset class. This has caused severe market imbalance and upset the natural relationship between supply and demand. As a result, legitimate customers such as trucking companies, airlines, and consumers have been forced to purchase oil at unnecessarily higher prices. This has dramatically raised costs, resulting in needlessly high prices for American consumers and businesses.

How do they get away with that?

Over the last 20 years, commodities markets have become increasingly less regulated. Today, as many as 90 percent of all commodities trades occur outside of the traditional marketplace exchanges. In these so-called “Swaps trades”, parties secretly buy and sell commodities with absolutely no one watching. This means speculators can manipulate oil prices and corner the market without anyone knowing.

In addition, other loopholes exist allowing increasingly sophisticated speculators to take advantage of consumers. For example, in 2000 Enron lobbied policy makers to permit some U.S. commodities exchanges to operate without normal oversight. This has allowed speculators to dodge public disclosure rules that would normally limit the number of trades an investor can make.

What is the solution?

To lower oil prices for all Americans, we need to increase domestic supply, exploration, alternative energy sources and conservation. We also must protect bona fide speculation and hedging. To address excessive speculation, Congress should promptly:

By adopting these common-sense solutions, Congress can dramatically reduce the price of oil and gas, providing immediate relief for businesses and hard working Americans.