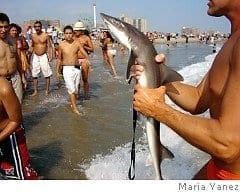 Many of us folks in the Plankton Forums thought Marius Mironescu did a great thing by rescuing the shark from the swimmers. On behalf of the MarineBio community – thanks Marius!

NEW YORK (AP) — When a Coney Island lifeguard spied a shark near an upset group of swimmers, he did what he thought was right: He rescued the fish.

Marisu Mironescu, 39, said he was prompted to action Monday after seeing about 75 to 100 people circling the 2-foot sand shark off the beach and “bugging out.”

“They were holding onto it and some people were actually hitting him, smacking his face,” said Mironescu. “Well, I wasn’t going to let them hurt the poor thing.”

He grabbed the largely harmless shark in his arms and carried it, backstroking out to sea, where he let it go. “He was making believe like he’s dead, then he wriggled his whole body and tried to bite me,” Mironescu said.

“We had a little bit of a punctuation mark at the end of summer with ‘Jaws’ junior showing up and frightening people,” said Adrian Benepe, the city Parks Commissioner.

The rescue ended a holiday weekend that began with another city shark scare Saturday, when a 5-foot thresher shark washed up on Rockaway Beach, sending hundreds of swimmers out of the water. About 10 blocks of the beach were also closed down for hours on Labor Day weekend.