The death of Dawn Brancheau in Orlando was tragic and our hearts go out to her family and friends. I understand it was her dream since the first time she visited SeaWorld to train marine mammals and I imagine she loved what she did. We get dozens of emails from our MarineBio members and other readers who talk about their dreams of becoming marine mammal trainers. They love whales and dolphins. I do too. I love them so much I’m willing to give up seeing them up close in an aquarium. Because I know they are happiest in the wild where they belong. When they’re contained in an unnatural environment they cannot follow their inborn instincts to swim long distances, hunt for prey, travel in pods and enjoy a healthy social life with their families in the wild. 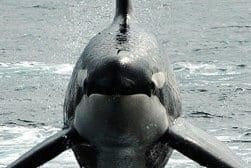 This tragedy is a loud message – whales and dolphins belong in the wild. If you love them, see them on BBC Blue Planet where they’ve been beautifully filmed in their natural habitat. Go see them for yourself in the wild. But don’t support keeping them in captivity. What if you were taken out of your home and confined to a 4′ x 4′ room? You’d probably go a little nutty after awhile too.

Dawn’s death was tragic, but keeping these animals in captivity and forcing them to perform tricks for food is tragic too. They don’t do flips and give fin rides because they’re having fun. They do it for food. Don’t believe for a second that they’re having fun. They’re being tortured in a way – to the delight and applause of crowds worldwide.

Whales and dolphins are majestic wild creatures and they have the right to live that way. If they’re kept in captivity for rehabilitation or temporarily for research – okay. But to keep them prisoners is just plain wrong.

My hope is that this was “Shamu’s” final show. It would be the greatest gift Dawn could ever give to her beloved marine mammals.

And to the media: Killer whales are now named orca and they’re dolphins first, then whales. Family: Delphinidae