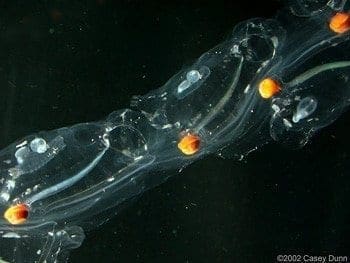 Transparent jellyfish-like creatures known as a salps, considered by many a low member in the ocean food web, may be more important to the fate of the greenhouse gas carbon dioxide in the ocean than previously thought.

In the May issue of Deep Sea Research, scientists report that salps, about the size of a human thumb, swarming by the billions in “hot spots” may be transporting tons of carbon per day from the ocean surface to the deep sea and keep it from re-entering the atmosphere.

Salps are semi-transparent, barrel-shaped marine animals that move through the water by drawing water in the front end and propelling it out the rear in a sort of jet propulsion. The water passes over a mucus membrane that vacuums it clean of all edible material.

The oceans absorb excess carbon dioxide from the atmosphere, including some from the burning of fossil fuels. In sunlit surface waters, tiny marine plants called phytoplankton use the carbon dioxide, CO2, to grow. Animals then consume the phytoplankton and incorporate the carbon, but most of it dissolves back into the oceans when the animals defecate or die. The carbon can be used again by bacteria and plants, or can return to the atmosphere as heat-trapping carbon dioxide when it is consumed and respired by animals.

Biologists Laurence Madin of Woods Hole Oceanographic Institution (WHOI) and Patricia Kremer of the University of Connecticut and colleagues have conducted four summer expeditions to the Mid-Atlantic Bight region, between Cape Hatteras and Georges Bank, in the North Atlantic, since 1975. Each time the researchers found that one particular salp species, Salpa aspera, multiplied into dense swarms that lasted for months.

One swarm covered 100,000 square kilometers (38,600 square miles) of the sea surface. The scientists estimated that the swarm consumed up to 74 percent of microscopic carbon-containing plants from the surface water per day, and their sinking fecal pellets transported up to 4,000 tons of carbon a day to deep water.

“Salps swim, feed, and produce waste continuously,” Madin said. “They take in small packages of carbon and make them into big packages that sink fast.”

In previous work, Madin and WHOI biologist Richard Harbison found that salp fecal pellets sink as much as 1,000 meters (3,280 feet) a day. The scientists also showed that when salps die, their bodies also sink fast—up to 475 meters (1,575 feet) a day, far faster than most pellets. If salps are really a dead-end in the food web and remain uneaten on the way down, they could send even more carbon to the deep.

Salpa aspera swims long distances down in daylight and back up at night in what is known as vertical migration. Madin, Kremer and colleagues Peter Wiebe and Erich Horgan of WHOI and Jennifer Purcell and David Nemazie of the University of Maryland found that the salps stay at depths of 600 to 800 meters (1,970 to 2,625 feet) during the day, coming to the surface only at night.

“At the surface,” Madin said, “salps can feed on phytoplankton. They may swim down in the day to avoid predators or damaging sunlight. And swimming up at night allows them to aggregate to reproduce and multiply quickly when food is abundant.”

Because of this behavior, salps release fecal pellets in deep water, where few animals eat them. This enhances the transport of carbon away from the atmosphere.

Funding for this study was provided by the National Science Foundation, National Oceanic and Atmospheric Administration, and the Access to the Sea program at Woods Hole Oceanographic Institution.