It’s about time for OCEANS 21

Today, the U.S. House Subcommittee on Fisheries, Wildlife, and Oceans is marking up the Ocean Conservation, Education, and National Strategy for the 21st Century Act (OCEANS 21). To date, this bill represents the most comprehensive package of ocean conservation reforms recommended by two blue-ribbon panels. “Almost five years after the Pew Oceans Commission and the U.S. Commission on Ocean Policy warned that our oceans were in serious trouble, Congress is finally poised to act.”

“OCEANS 21 establishes a national policy to protect, maintain and restore the health of our marine ecosystems. It creates a process by which federal, state and local government agencies can better coordinate their activities to achieve goals and milestones for improving ocean health. This bill also gives the National Oceanic and Atmospheric Administration, for the first time, a clear, statutory mission to carry out ocean observation, research and conservation.”

“For too long, decisions affecting our oceans have been made with little regard for the health and productivity of the broader marine ecosystem. OCEANS 21 will change that.”

And, in other Pew News:

Penguins on the Brink? 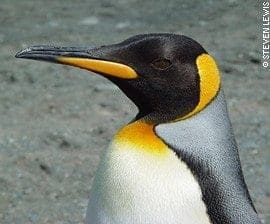 04/23/2008 – Antarctic penguins have fascinated people since they were first discovered by Magellan’s expedition in 1520; the expedition historian called them “strange geese,” while the crew used the fearless birds as a source of food. Today, thanks to a combination of man-made climate change and increased fishing for krill — the bread and butter for many penguin species — these flightless birds are up against threats far greater than that posed by Magellan’s hungry sailors.

The next few months may prove critical for the penguins, as a series of scientific conferences, culminating in an international policy meeting this fall, could make their lives easier – or perpetuate challenges for which millions of years of evolution never prepared them.

Although the Antarctic was once thought largely immune to the ravages of global warming, a steady stream of recent research has painted quite a different picture. According to the British Antarctic Survey, surface temperatures in Antarctica have risen by nearly 3 degrees Centigrade (5 degrees Fahrenheit) over the last 50 years — about 10 times the global average. Alarmingly, research by leading biologists has found that many of the iconic animals who call the Antarctic home, including several species of penguins, are experiencing sharp population declines.

Along the northwestern coast of the Antarctic Peninsula, the population of Adelie penguins, one of the best known of all penguin species for their classic tuxedo-like look, has plummeted 65 percent over the past 25 years. And king penguins, according to a recent study published in the Proceedings of the National Academy of Sciences, could be extinct within the next two decades. Researchers have also indicated that emperor, chinstrap and gentoo penguins — which, along with Adelies, are the only four penguin species that breed on the Antarctic continent itself — might not be far behind.

While global warming is destroying their habitat, man now is also competing with penguins for their principal food: a tiny, yet invaluable shrimp-like animal known as Antarctic krill. Measuring only a couple of centimeters in size, krill comprise the largest biomass in the Southern Ocean and serve as a key element in the Antarctic food chain – providing food for scores of penguin, whale and seal species. Yet even krill have to eat, and with a reduction in sea ice due to the warmer water associated with climate change, krill cannot find enough plankton on which to forage. This, in turn, sets in motion a chain reaction felt throughout the Antarctic food web.

The Commission for the Conservation of Antarctic Marine Living Resources, an organization comprising 25 member nations whose vessels fish in Antarctic waters, manages krill in the Southern Ocean. Last year the commission, which includes the United States, took important steps to regulate krill fishing by strengthening the system used to gather information from fishing vessels about the amount of krill caught each year. But with growing interest in krill as a source of feed for farmed salmon and of omega-3 oils for health supplements, we risk a significant expansion of fishing that could potentially undo these reforms.

The commission has been a pioneer in the management of marine resources. It is critical, moving forward, that it manages fishing not just with the goal of protecting the fish, but also with the objective of ensuring the survival of other parts of an ecosystem that depend on them — as penguins do on krill.

Over the next several months scientists and diplomats from many nations will hold a series of meetings, as policymakers prepare for the commission’s annual gathering this fall. The Bush administration should ensure that the commission follows through on its pledge to implement its new polices for managing krill fishing.

It is also critical that the United States act quickly to cut its own carbon pollution and lead the world in implementing a new international treaty to avoid the worst impacts of global warming.

For decades, the United States has been a leader in protecting the Antarctic and its vast natural resources from short-sighted commercial exploitation. By holding the commission’s actions to its words, the White House can ensure that the international commission continues to employ broad, science-based approaches to the management of marine resources well past the date when President Bush leaves office.

We may have moved beyond using the Antarctic’s “strange geese” as food ourselves, but we’ll need to regulate carefully our consumption of the penguin’s own food if we want to stop the march into danger for these beloved birds.