Shark Week 2009 – I got an email from “WhySharksMatter” blogger David Shiffman asking for questions he should ask Discovery Channel producers about airing their infamous shark shockumentaries.

At first I fully agreed with him. Yeah! Let’s tell Discovery we’re sick of the shock-docs and we want shark shows that educate us on the magnificence of sharks and on why they need protection. Stop demonizing sharks with your “World’s Deadliest Sharks” and “Shark Attack Revisited in Gory Detail,” which do nothing but trick people into thinking sharks are man-eating monsters. 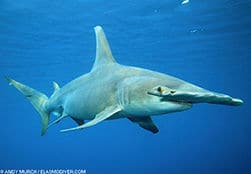 But has Discovery already gotten the message? It’s been awhile – years – since I watched Shark Week. I stopped watching when someone I thought was a shark-advocate got bitten (while filming for Discovery), then turned around and capitalized on his unfortunate accident. Erich Ritter’s “Anatomy of a Shark Bite” sickened me – as did the other shockumentaries detailing shark bite victims’ experiences. I knew Erich personally before his bite and was disappointed to watch as he negated everything we ever talked about. What was the point of that documentary? Shock value. Higher TV ratings. Ad revenue. DVD sales. Yuck.

I hated that the Discovery Channel aired shows with that threatening voice-over, and all the fear-mongering worked into the script. People who fear sharks won’t respect the fact that shark populations are dwindling worldwide. The only thing people were “discovering” during shark week is that sharks are man-eating demons. There was very little mention of the true nature of sharks, which is that they’re apex predators in search of fish, and seals and other marine critters they find yummy. And that more often than not, human encounters with shark in the wild consist of the sharks swimming away – not attacking. Sharks are extremely important to balanced marine ecosystems. Without them, there’s a top-down cascade of ill-effects as shark prey begin to proliferate and take over – causing their prey-species to be depleted. (See: Baum and Worm’s “Cascading top-down effects of changing oceanic predator abundances.” Journal of Animal Ecology. 2009 Mar 9.)

But before sending comments to David booing Discovery, because it’s been so long since I tuned in to Shark Week, I visited the the 2009 Shark Week website. To my surprise, most of the blood and gore has been replaced with messaging on shark conservation and it seems they’re planning to air documentaries about sharks that are informative and educational rather than shocking and gory. They even have a map of shark populations and their conservation status around the globe. So bravo to Discovery – I will tune in again this year.

My comment, rather than question, for David is that he should tell Discovery that there’s a huge viewership out here who feel there’s no need for all the shock-docs – we need more documentaries like BBC’s Blue Planet and Planet Earth that simply share the behavior and beauty of amazing fauna and flora. And shark documentaries that educate and entertain us with information on their fascinating biology and behavior, and the need for conservation, will draw as many viewers as Shock Weeks past. I’ll be one of them!