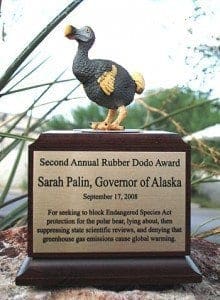 This woman scares me. The way she proudly announced during the GOP convention that her husband is “a lifelong commercial fisherman … a production operator in the oil fields of Alaska’s North Slope” sent chills down my spine. That plus the fact that she’s way too inexperienced and young for this job and was obviously chosen strategically in a move that removed any last shred of doubt that I would vote for Obama.

So today we see this press release from The Center for Biological Diversity that Governor Failin (sorry, can’t help myself) is being awarded the 2008 Rubber Dodo Award:

Palin Has Sought to Remove Endangered Species Act Protection for the Polar Bear, Suppressed and Lied About State Global Warming Studies, and Denied That Global Warming Is Caused by Greenhouse Gas Emissions

“Governor Palin has waged a deceptive, dangerous, and costly battle against the polar bear,” said Kieran Suckling, executive director of the Center for Biological Diversity. “Her position on global warming is so extreme, she makes Dick Cheney look like an Al Gore devotee.”

Palin has waged a deceptive public relations campaign, asserting that the polar bear is increasing. But many populations (including Alaska’s southern Beaufort Sea) are in decline and two-thirds (including all Alaska bears) are projected to disappear by 2050 by the U.S. Geological Survey.

Palin has repeatedly asserted that Alaska Department of Fish and Game scientists found fatal flaws in the sea ice models used by the U.S. Fish and Wildlife Service to determine the polar bear is threatened. When challenged, Palin refused to release the alleged state review. Independent scientists eventually obtained a summary through the federal Freedom of Information Act, revealing that Palin had lied: The state mammalogists concurred with the Fish and Wildlife Service determination that Arctic sea ice is melting at an extraordinary rate and threatens the polar bear with extinction.

“All global warming deniers are eventually forced to suppress scientific studies, and Palin is no different,” said Suckling. “To maintain her ludicrous opposition to protecting the polar bear in the face of massive scientific consensus, Palin stepped over the line to lie about and suppress government science.”

Palin has since filed a frivolous lawsuit against the Bush administration to have the threatened listing overturned. Meanwhile, the U.S. Geological Survey announced on September 16th that the 2008 summertime Arctic sea-ice melt was the second greatest on record, nearly matching the extraordinary melt of 2007.

“Palin’s insistence that Arctic melting is ‘uncertain’ is like someone debating the theory of gravity as they plunge off a cliff,” said Suckling. “It’s hopeless, reckless, and extremely cynical.”

In 1598, Dutch sailors landing on the Indian Ocean island of Mauritius discovered a flightless, three-foot-tall, extraordinarily friendly bird. Its original scientific name was Didus ineptus. (Contemporary scientists use the less defamatory Raphus cucullatus.) To the rest of the world, it’s the dodo — the most famous extinct species on Earth. It evolved over millions of years with no natural predators and eventually lost the ability to fly, becoming a land-based consumer of fruits, nuts, and berries. Having never known predators, it showed no fear of humans or the menagerie of animals accompanying them to Mauritius.

Its trusting nature led to its rapid extinction. By 1681, the dodo was extinct, having been hunted and out-competed by humans, dogs, cats, rats, macaques, and pigs. Humans logged its forest cover and pigs uprooted and ate much of the understory vegetation.

The dodo’s reputation as a foolish, ungainly bird derives in part from its friendly naiveté and the very plump captives that were taken on tour across Europe. The animal’s reputation was cemented with the 1865 publication of Lewis Carroll’s Alice’s Adventures in Wonderland. Based on skeleton reconstructions and the discovery of early drawings, scientists now believe that the dodo was a much sleeker animal than commonly portrayed. The rotund European exhibitions were accidentally produced by overfeeding captive birds.

The Center for Biological Diversity is a nonprofit conservation organization with more than 180,000 members and online activists dedicated to the protection of endangered species and wild places.