Hope in a box? 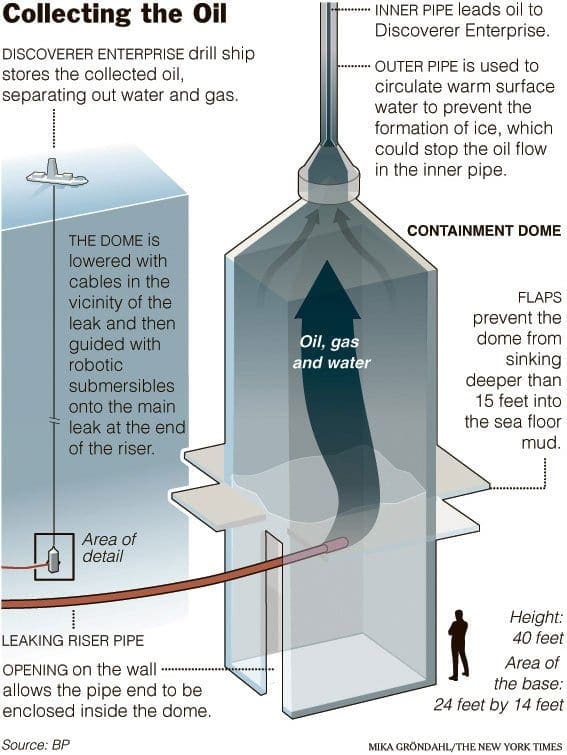 It seems that one of the smaller leaks has been stopped by a valve, that’s certainly good news. According to the AP, a massive concrete-and-steel “dome” will be lowered and placed above the biggest leak on Thursday to capture the oil spewing from the blown-out well. Though it’s never been done before, the 100-ton box will be positioned Thursday afternoon by a crane to about 1 mile beneath the surface of the Gulf of Mexico. If it works, up to 85 percent of the oil will be captured and diverted to a tanker at the surface. This will be a temporary solution while the relief well is drilled to take the pressure off the blown-out well, which can take as long as three months. That’s time the Gulf cannot afford. I think we’ve all seen how well the booms work. Other solutions are being investigated and some of the oil has been skimmed or burned from the surface.

The BP-chartered ship carrying the containment dome arrived Thursday morning at the leak site and its hoped that the box will be in place by this evening, though we won’t know  until Sunday or Monday whether it’s working. The AP reported that “thick, tar-like oil with a pungent scent surrounded the boat as far as the eye could see.” Ugh.

If placement of the dome is successful, it’s likely another box will be used to help contain the other smaller leak.

There is hope, but it seems there are still a lot of “ifs.” The water at that depth is about 42-degrees Fahrenheit, and the pressure is extremely high. These conditions could cause the pipe leading the oil up to the tanker could become clogged. The plan is to pump warm water and methanol down the pipe to prevent/dissolve clogging. There is also a risk to the tanker of carrying the “volatile cocktail” of oil, gas and water, however the liquids will be separated to avoid explosion.