Great book on coral reefs and their conservation 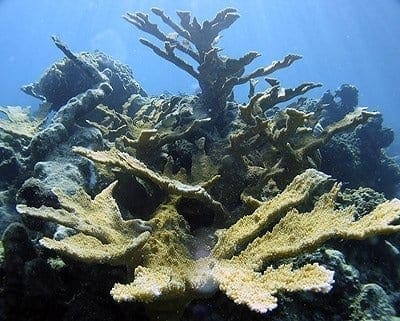 In keeping with my recent coral reefs theme, I’m reading “The Enchanted Braid: Coming to Term with Nature on the Coral Reef” by Osha Gray Davidson cover to cover. We’re featuring corals in the upcoming MarineBio newsletter, so I was inspired to pick this book up again. And I’m glad I did.

I’ve read — and liked — bits and pieces of the book since I bought it four years ago. I can now see that I’ve been missing out on an immensely enjoyable book now that I’m reading it properly. Davidson is a journalist who developed an appreciation for coral reefs during time spent in the Florida Keys.The book is accessible to laypeople and highly informative. Davidson’s self-described “florid” prose paints a vivid picture of the beauty of coral reefs and he describes the problems facing coral reefs in an evocative and thought-provoking manner. He describes coral reefs as “the soul of the sea” and aptly describes their biology and importance to the ocean and to humankind. The book is simultaneously a travel narrative, scientific and environmental treatise, and philosophical look at why we need to take better care of coral reefs and other precious ecosystems. Though the messages in the book are clear that coral reefs are in trouble, Davidson’s writing is not filled with gloom and doom and somber predictions of a coral-less ocean. Rather, he puts coral reefs in the context of survival and inspires hope for their future.

I highly recommend this book to both laypeople and scientists alike.

Next on my list is “Fire in the Turtle House: The Green Sea Turtle and the Fate of the Ocean” also written by Davidson. This book is described as:

Sea turtles have existed since the time of the dinosaurs. But now, suddenly, the turtles are dying, ravaged by a mysterious plague that some biologists consider the most serious epidemic now raging in the natural world. Perhaps most important, sea turtles aren’t the only marine creatures falling prey to deadly epidemics. Over the last few decades diseases have been burning through nearshore waters around the world with unprecedented lethality.

What is happening to the sea turtle, and how can it be stopped? In this fascinating scientific detective story, Osha Gray Davidson tracks the fervent efforts of the extraordinary and often quirky scientists, marine biologists, veterinarians, and others racing against the clock to unravel a complicated biological and environmental puzzle and keep the turtles from extinction. He follows the fates of particular turtles, revealing their surprisingly distinct personalities and why they inspire an almost spiritual devotion in the humans who come to know them. He also explores through vivid historical anecdotes and examples the history of man’s relationship to the sea, opening a window onto the role played by humans in the increasing number of marine die-offs and extinctions.

Beautifully written, intellectually provocative, Fire in the Turtle House reveals how emerging diseases wreaking havoc in the global ocean pose an enormous, direct threat to humanity. This is science journalism at its best.