Good news about the plight of corals? 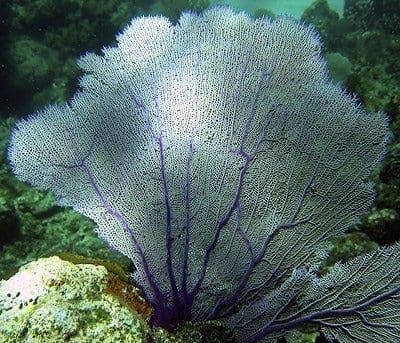 I just came across this quote in an interview with International Society for Reef Studies President Richard Aronson on SeaWeb and was immediately inspired to share it with you:

The main thing that I would advise scientists, conservationists and the public to do is to take heart, be courageous and don’t give up on coral reefs and the rest of the marine environment. A lot of people get compassion fatigue, which is to say they are continually bombarded with what is wrong with coral reefs so they feel like giving up. But there are some things going right with reefs, both ecologically in terms of recovery of some coral populations, and in terms of conservation and policy initiatives.

If you are a scientist, manager, policymaker or concerned citizen, think for yourself. Formulate your own opinions, follow the science, read all you can about the issues and don’t follow the latest self-proclaimed ideological leader. Think about it all with a view as to what can we do to help save coral reefs.

It’s easy to forget that there is hope when most of what we hear in the media is bad news. I fully agree with Aronson — compassion fatigue is a real problem that makes it too easy to throw up your hands and feel helpless and hopeless. But, as he advises, if you put the issues into perspective, whether it be coral reefs, overfishing, or habitat destruction — there are solutions and we can make a difference. The more educated we become on these issues, the more power we have to solve them.

I also love his advice to formulate your own opinion. Don’t believe everything you read — follow the science and make fact-based decisions.

That’s exactly what we try to do at MarineBio. We don’t just post a lot of opinionated doomsday woe-is the-ocean hyperbole. We provide science-based content and back it up with scientifically-proven facts. And we are always open to constructive criticism. If something we say is incorrect, we’re delighted when its brought to our attention by one of our readers and we’re quick to fix it. Our objective is to teach people that the ocean is in trouble, to teach them why, and to teach them about solutions and how they can help.

This is a great interview — here’s an excerpt, but I encourage you to visit SeaWeb to read the rest:

What are the greatest threats to corals today?

There are a variety of threats. The problem is always trying to disentangle them and trying to determine which threats contribute more to the decline of coral reefs than the others. Two threats, global climate change and disease outbreaks, are intimately intertwined. Rising temperatures cause corals’ symbiosis with single-celled algae to break down. They eject most of their algae and turn white, which is called coral bleaching. Without their symbiotic algae photosynthesizing, the coral animals cannot get the carbohydrates they need and they are basically ill with a noninfectious disease.

Infectious diseases like whiteband disease, which devastated elkhorn and staghorn corals in the 1980s and 1990s throughout the Caribbean, are another problem. A number of infectious diseases become more virulent as the temperature goes up…. These are very serious threats on a regional to global scale for coral reefs.

There are also many local threats, like overfishing, nutrient pollution, ship groundings and sedimentation from land clearing. If you clear forests, eroding soil runs down the rivers and falls onto the reef, and corals hate to have sediment dumped on them — it smothers them.

What does ocean acidification do to coral?

Ocean acidification is another aspect of our changing global environment. It potentially is as dangerous for corals and other calcifying marine life as rising temperatures. The more carbon dioxide that gets pumped into the atmosphere, the more it gets dissolved in the ocean and the more acidic the ocean gets…. A more acidic ocean makes it more difficult for corals to build their skeletons, which affects their ability to build the reefs upward and keep up with rising sea levels.

Some scientists predict that if current trends in fishing, pollution and emissions continue, some coral reefs largely will be gone in the next few decades. Have we already reached a tipping point?

We have not reached a tipping point. But the window is closing. Now is the time to stand up and fight for the environment. This is not the time to hang it up and go home.

So what can we do for corals?

There are issues like fishing pressures and nutrient pollution that we can fix on a local to regional level. Then there are global issues. The primary global problem is the emission of greenhouse gases, which causes not only warming temperatures but ocean acidification as well. This is not an unstoppable problem. We need global, international action to mitigate and reverse the amount of greenhouse gas emissions. Nothing less is going to do it. This is the planet we are talking about. If we don’t act, then we aren’t going to make it.