Global Warming – What You Need to Know

Global Warming – What You Need to Know, a 2 hour documentary on Discovery Channel last night, made me happy. Happy? Yes. I was happy to see that this issue is getting some attention in the mainstream mass media. This program, in addition to Al Gore’s “An Inconvenient Truth” and recent coverage in “Time” magazine, is a good indication that people are starting to wake up and smell the heat. 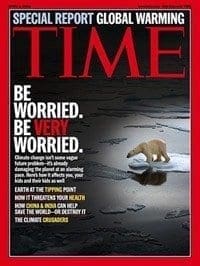 Global warming is very real and poses a very real threat if we don’t start making changes now. But some people still don’t seem to take it seriously. In my full-time job I lobbied hard to be allowed to work from home a few days a week so that I can reduce my CO2-coughing 45 minute commute; they looked at me like I had 3 eyes.

This is no longer a “debate” — it’s real and if the US, who very likely created the “debate” by ignoring the science that was there 20 years ago, doesn’t lead the way by developing the collective will that’s also needed worldwide (yoohoo — China…) then by the end of our lifetimes, the world will be a very unhappy place — mass extinctions, major cities drowned resulting in enormous displaced populations, severe weather far worse than what we’ve seen in recent years, no more coral reefs….the list goes on. It’s so hard to fathom (pardon the pun) cities that are so iconic in the US — gone. New York City, Washington DC, Philadelphia, Boston… Florida! I can’t imagine a world with no beaches.

All of this sounds so melodramatic — but it’s not. It’s reality. Last night’s documentary, like “An Inconvenient Truth” offered hope in the end. There are small measures we can all take to reduce CO2 emissions — scientists estimate that they need to be reduced by at least 50% if we’re to avoid the devastation that global warming may cause. We can:

None of these suggestions will make your life painfully inconvenient. We, especially Americans, have been terribly spoiled by modern conveniences. It won’t take much to continue enjoying those conveniences while we’re making sure that our children can enjoy a healthy, comfortable, safe planet for generations to come…..