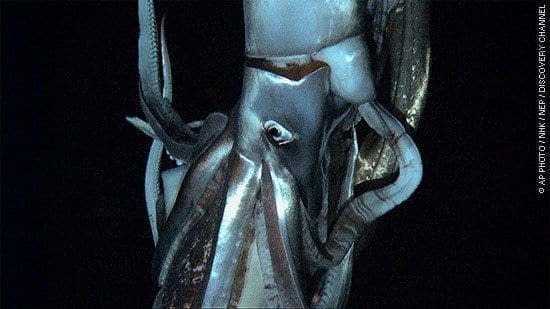 A research crew from Japan’s National Science Museum have managed to capture on film for the first time a giant squid (Architeuthis) in its deep sea natural habitat. Working with Japanese public broadcaster NHK and the US Discovery Channel, the researchers found the massive invertebrate at a depth of a depth of 630 metres as the animal was holding on to bait swimming against the current in the depths. The footage was filmed in the Pacific Ocean near the Ogasawara Islands, 1000 km south of Japan, an area where two previous sightings in 2006 and 2012, have been reported.

The silver-colored mollusk is often considered to be last great mystery of the ocean and has thought to be the inspiration for many sea monster myths and stories throughout the millennium, specifically in Nordic legend where it is known as the ‘Kraken’. Giant squids are a type of cephalopod that can grow up to 14 metres in length. They, along with its distant cousins the colossal squids, have the largest known eyes in the animal kingdom. They hunt other squid and deep sea fish throughout these cold dark depths, although they themselves are often the prey to sperm whales. 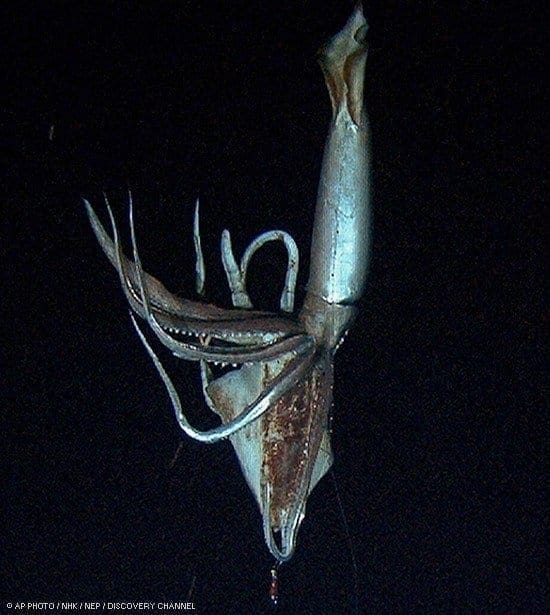 The footage was the culmination of around 100 missions during which time scientists spent 400 hours in a cramped three-man submersible tracking the beast via cameras. Zoologist Tsunemi Kubodera said: “Many people have tried to capture an image of a giant squid alive in its natural habitat, whether researchers or film crews. But they all failed. These are the first ever images of a real live giant squid.” Kubodera explained that the mission was a success due to the use of lights which were invisible to both human and squid’s eyes. He added: “If you try and approach making a load of noise, using a bright white light, then the squid won’t come anywhere near you. That was our basic thinking. So we sat there in the pitch black, using a near-infrared light invisible even to the human eye, waiting for the giant squid to approach.”

The animal in this footage was about three meters long, but according to Kubodera, the animal may have been eight meters if its two long tentacles had not been missing. He went on to explain that “with this footage we hope to discover more about the life of species”.