The first high seas Marine Protected Area (MPA) in the Antarctic region has been declared in an area south of the South Orkney Islands. The proposal was successfully pitched by the UK delegation to the meetings last week of the Commission for the Conservation of Antarctic Marine Living Resources (CCAMLR) in Tasmania. The South Orkneys MPA is situated in the northern Weddell Sea, east of the tip of the Antarctic Peninsula — a prime area for feeding humpback whales. 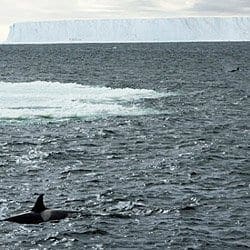 At just under 94,000 sq kms, the protection of the South Orkneys MPA is of a significant size. Overnight the global area of protected waters, with this announcement, increased by 4% according to Louisa Wood, from the IUCN Global Marine Programme. The global area of protected waters now stands at 0.92% of the world ocean — still far behind the land with as much as 12% protected, according to some estimates.

MarineBio’s Director of Marine Mammals, Erich Hoyt, Research Fellow and Critical Habitat MPA Programme Lead for the Whale and Dolphin Conservation Society, stated “This is a step in the right direction for long-awaited protection of the marine component of the Antarctic Marine Region,” said Erich Hoyt, “We still have a very long way to go. The much larger proposed Ross Sea MPA on the other side of Antarctica urgently needs the same sort of protection. But the UK government is to be applauded for its work in submitting the proposal and CCAMLR, the Antarctic Conservation body, for approving it. Now what we need is an acceleration of this high seas protection in the Antarctic and elsewhere around the world.”

The formal protection becomes effective in May 2010.  No fishing activities and no discharge or refuse disposal from fishing vessels will be allowed in the area. The British Antarctic Survey plans to continue its research in the area, seeing the MPA designation as an opportunity to improve its monitoring of the effects of human activities and climate change on the Southern Ocean.