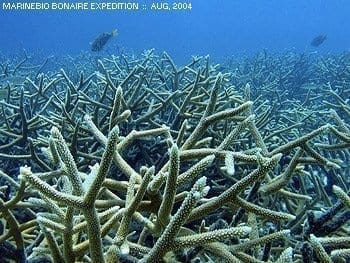 The chemistry of the world’s oceans is changing with increasing levels of carbon dioxide in the atmosphere because of the burning of fossil fuels in cars and power plants. A report released recently by the National Center for Atmospheric Research says the change in the air is putting marine life and ecosystems at great risk.

The amount of carbon dioxide in the atmosphere is predicted to double or triple by the end of the century. Lead author Joan Kleypas with the government-funded National Center for Atmospheric Research says absorption of CO2 by the ocean used to be considered an environmental plus. “Right now the estimates are that the oceans have absorbed about one-third of all the extra CO2 that humans have put into the atmosphere,” she says. “So, it is a sponge. It is basically soaking up a lot of the CO2, which is good because it sort of slows down this whole process of greenhouse gas warming.”

But the report documents the negative impact that excess CO2 is having on the world’s oceans. Kleypas says increased levels of CO2 make the ocean more acidic and put sea organisms in danger. “Particularly those organisms which secrete calcium carbonate shells.”

“This is a class of creatures that includes corals, clams, snails, starfish and sea urchins. “They will be less able to secrete their shells and that ability to secrete their shells will continue to decrease as long as we continue to add CO2 to the atmosphere,” Kleypas says. “It [CO2] also increases the rate at which this calcium carbonate, which is already formed in the oceans, starts to dissolve. So, it [has] this corrosive effect.”

This could mean slower growth in the world’s corals reefs, which are already stressed and dying from the warmer ocean temperatures associated with increased greenhouse gases in the atmosphere. “Our bones are not calcium carbonate, but they are similar,” Kleypas says. “And people have things like osteoporosis. That is bone loss. This is sort of a similar type of thing that happens with these organisms.”

Kleypas says added CO2 has the potential to alter the biodiversity and productivity of the ocean. Coral reefs protect coastlines and are a nursery ground and habitat to 25 percent of all marine life. “So you can imagine that if you take that whole food supply away, it is going to propagate through the food chain and food webs so that we might see our fish stocks decline.”

Kleypas adds that many calcifying organisms, including common marine plankton such as pteropods, a kind of snail, are directly threatened by the rising CO2 levels. But pteropods are food for important commercial fish species like salmon, mackerel, herring and cod, so these animals would also be threatened.

Kleypas says scientists are only beginning to understand the complex interaction between large-scale chemistry changes and marine ecology. The report outlines research priorities to determine how changes in ocean chemistry affect the health of marine ecosystems.

Thomas Lovejoy, president of H. John Heinz III Center for Science, Economics and the Environment , says the report is a wake-up call for serious action on global warming. “We need a crash program worldwide to find an energy base that does not essentially pollute the atmosphere with greenhouse gases,” Lovejoy says. “That will be a combination of energy sources, things like energy efficiency and energy conservation. It may well include nuclear for a portion of time and exploration of technologies that we are not using now.”

Lovejoy says implementation of such policies will take political will and leadership on a global scale. He says the report is a clear signal that the oceans can no longer be regarded as a kind of utility sink for industrial emissions, and that continuing to treat them as such could have devastating consequences for the life of the planet.