Why do endangered species tend to attract a higher demand in some markets? The higher the demand, the higher the price and the greater lengths fishermen will go to harvest them. Supply and demand, money and greed — how can we stop this vicious cycle? Here’s a recent story about a shipment that was seized by customs in Indonesia: 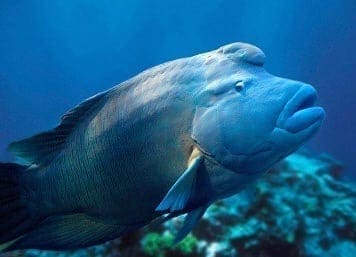 The world’s largest coral reef fish, the Humphead Wrasse is a prized delicacy served in high-end restaurants with a price tag of over US$100 per kg. Hong Kong represents the largest known consumer market for this species, although upscale eateries in Malaysia, Singapore and mainland China are also known to offer servings of the electric blue fish.

The 36 live wrasse, “harvested” in Malalayang, Manado, were destined for Hong Kong before being seized by the Fisheries Quarantine officers in Manado airport.

The Humphead Wrasse, also known as Napoleon Wrasse or Ikan Napoleon in Bahasa Indonesia, is listed on Appendix II of the Convention on International Trade in Endangered Species of Wild Fauna and Flora (CITES), which means international trade is possible only with valid CITES permits. The CITES Appendix II listing helps supply and consumer countries to ensure that the trade in the species is both legal and sustainable.

Found on coral reefs across Southeast Asia, the Western Pacific and the Indian Ocean, this distinctive species can grow to over two metres long, weigh up to 190 kg and live for more than 30 years. The trade in this species, however, is selective; smaller sized individuals, including many juveniles, are preferred over full grown adults because the flesh is said to be more tender, and smaller fish are better suited to the restaurant trade that prefers to serve whole fish. The species is most typically traded live.

Indonesia allows an annual capture of 8,000 individuals; none for local consumption, all for export. Harvest is only permitted in specified areas; namely Papua, Maluku, East Nusa Tenggara and West Nusa Tenggara.

“Since CITES Appendix II came into force in January 2005, no capture of the Humphead Wrasse in Sulawesi has been allowed, and no CITES export permits have been issued from that region,” said Adi Susmianto, Director of Biodiversity Conservation of Forest Protection (PHKA), Indonesia’s CITES Management Authority. “The situation for north Sulawesi province will be further reviewed when Indonesia decides on annual quotas for 2007.”

He added that detailed investigations would continue to track down the source of this shipment. A 40-year-old Indonesian citizen has been detained in connection with the case, but has yet to be charged. Indonesian authorities will be contacting their counterparts in Hong Kong soon, as this is where the wrasse were headed for. Of the confiscated wrasse, 25 survived and were released into the Bunaken National Park.

The earlier two seizures, both in January this year and also in North Sulawesi, were the first since the Appendix II listing came into force in 2005. Fishermen in both cases have been charged under Act No. 5/90, Government Regulation 8/99, Ministry Decree of Ministry of Forestry of Republic of Indonesia No. 447/2003 and are awaiting court proceedings. Indonesian authorities have forwarded the details of these cases to their counterparts in Hong Kong.

The first seizure took place on 13 January, in the Bunaken National Park when 207 live Humphead Wrasse were confiscated by the Bunaken National Park Joint Patrol with the Water Police. The fish had been captured within the park, an important protected area for marine species. A 45-year-old fisherman was charged under Act No. 5/90, Government Regulation 8/99, Ministry Decree of Ministry of Forestry of Republic of Indonesia No. 447/2003.

In the second case, 450 Humphead Wrasse were seized from a fisherman in Likupang, in the North Minahasa District, on 25 January. The fish, which had been harvested in Likupang, were confiscated by the Water Police working with the North Sulawesi Management Unit of Natural Resources Conservation. The surviving 357 wrasse were released.

“Indonesia remains a major supplier to Hong Kong and other end-use markets, which drive demand for this high-value reef fish,” said TRAFFIC Southeast Asia Regional Director James Compton. “However, the challenge for Indonesia is to develop a workable strategy for monitoring and law enforcement – otherwise the fishery cannot be managed for the long-term benefits of local and national interests.”

Indonesian representatives joined authorities from Hong Kong SAR, China, Malaysia, Papua New Guinea and the Philippines recently to discuss international co-operation for the management of this lucrative trade. As a result of direct contacts made at this workshop, co-organised by WWF, TRAFFIC and IUCN-The World Conservation Union, Indonesian authorities will be following up the seizures directly with their counterparts in Hong Kong.

“Cooperation between countries, and by the relevant fisheries and management authorities within source countries, is key to the successful implementation of the CITES Appendix II listing for the Humphead Wrasse,” said Dr. Yvonne Sadovy, Chair of the IUCN Groupers & Wrasses Specialist Group, University of Hong Kong. “If the species is sustainably managed and traded, then the situation is win-win; traders can continue their business, consumers can eat the fish, and Napoleon fish populations can once again be healthy for all to enjoy.”

At present, Hong Kong SAR does not implement the CITES Appendix II-listing for Humphead Wrasse, pending the enactment of new legislation later in 2006. As a result, Humphead Wrasse can be legally imported without CITES paperwork into the territory at the present time. The new legislation will require both import and possession permits in Hong Kong, in addition to the CITES permits that must be issued by exporting countries.