A Global Map of Human Impacts to Marine Ecosystems 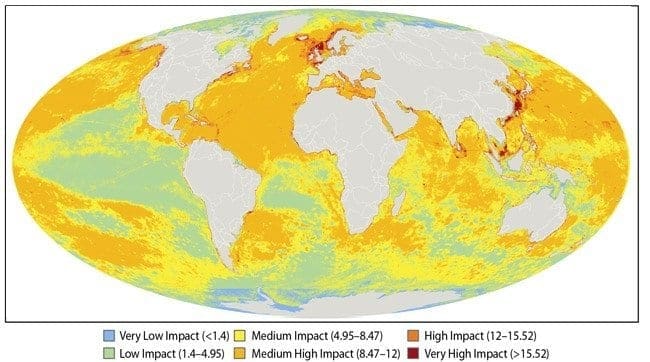 We can all change our behavior for a week, or a day — why not Earth Year? Or Earth Decade? Or Earth Millennium! I know, Earth Day/Week is a good opportunity to raise awareness. So… why didn’t I blog last week? Because I was too busy swapping incandescent for fluorescent light-bulbs? Because I was composting? No… because I was in a conference at a large downtown Atlanta hotel where, being aware of the fact that it was Earth Week, I cringed at all the excess. Did we consume water poured into glasses out of pitchers? Nope, small bottles of water and canned soft drinks were provided — waste (at least the coffee was served in mugs not styrofoam). Was my hotel room temperature a nice, even no heat or A/C necessary in the gorgeous spring weather? Nope, it was frosty with the A/C blasting. Did I even have the option to re-use my towels? Nope, all 12 of them were swapped out each day. Um, I’m not that dirty. The human impact on this planet is huge — and getting bigger all the time. National Geographic recently aired a series called “Tracing the Human Footprint” that discusses the first map that traces human impact on Earth. This is great! It’s scary and fascinating to know what we’re inflicting on Planet Earth. Even more relevant to MarineBio is a global map of human impact on the ocean published by the National Center for Ecological Analysis and Synthesis (NCEAS), a research center of the University of California, Santa Barbara. In answer to the question “why map the human impact to the world’s oceans?” The NCEAS says:

What happens in the vast stretches of the world’s oceans — both wondrous and worrisome — has too often been out of sight, out of mind. The sea represents the last major scientific frontier on planet earth — a place where expeditions continue to discover not only new species, but even new phyla. The role of these species in the ecosystem, where they sit in the tree of life, and how they respond to environmental changes really do constitute mysteries of the deep. Despite technological advances that now allow people to access, exploit or affect nearly all parts of the ocean, we still understand very little of the ocean’s biodiversity and how it is changing under our influence. The goal of the research presented here is to estimate and visualize, for the first time, the global impact humans are having on the ocean’s ecosystems. Our analysis, published in Science, February 15, 2008 (no subscription required), shows that over 40% of the world’s oceans are heavily affected by human activities and few if any areas remain untouched.

No need to say anymore – check it out for yourself!