The idea of traveling underneath the ocean waters inside a contained vessel has been around for centuries. Legend says Alexander the Great ventured below the waters of the Aegean Sea inside a glass barrel around 333 B.C. He is reported to have seen whales and deep-sea life on his underwater journey.

Sylvia Earle: Here’s how to protect the blue heart of the planet on TED (technology, entertainment, design). If you haven’t visited TED, which features talks from many of the world’s greatest minds – we highly recommend it.

The idea of traveling underneath the ocean waters inside a contained vessel has been around for centuries. Legend says Alexander the Great ventured below the waters of the Aegean Sea inside a glass barrel around 333 B.C. He is reported to have seen whales and deep-sea life on his underwater journey. The next record of a submarine came more than 1900 years later. In 1578 A.D., British naval officer William Bourne described a wooden frame vessel enclosed in waterproof leather, which could be rowed underwater. Bourne’s creation was never realized.

In 1904, the French built the Aigrette, the first submarine to use a diesel engine on the surface and an electric engine below. The United States followed in 1911 with the F-class Skipjack. It too was powered by diesel instead of gas engines. Cornelius J. Drebbel, a Dutchman born in 1572 in the city of Alkmaar, (now famous for its Friday Cheese Market), Drebbel patented his submarine invention in 1598. He was a map maker, engraver, but especially an inventor. His submarine was powered by oars allowing it to be rowed underwater. Tubes to the surface provided air. This air system allowed the boat, which was bound by waterproof leather, to travel underwater for several hours. His boat was successfully tested in the Thames River and traveled at depths close to 15 feet. It is said England’s King James I rode in one of Drebbel’s submarines to prove its safety. The British navy was not interested in the craft.

During WWI, it was the Germans and their U-boats who proved the worth of the submarine. It is reported that Germany was responsible for the sinking of 11 million gross tons of Allied ships during the war. America’s entry into the war was partly because of Germany’s submarine efforts.

In 1938, Auguste Piccard built his record-setting bathyscaphe Trieste. This 50-foot-long submarine still holds the record for deepest dive: more than 35,000 feet into Challenger Deep in the south Pacific’s Marianas Trench, the deepest point known in the ocean.

The British developed radar and sonar during WWII. The U.S. Navy improved these systems along with the German-perfected snorkel (which greatly increased a submarine’s submergence time by allowing diesel engines to run underwater) and included them in their new Guppy submarines. 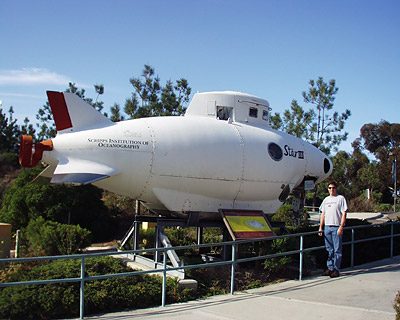 Submarines are completely enclosed vessels with cylindrical shapes, narrowed ends and two hulls: the inner hull and the outer hull. The inner hull protects the crew from the immense water pressure of the ocean depths and insulates the sub from the freezing temperatures. This hull is called the pressure hull. The outer hull shapes the submarine’s body. The ballast tanks, which control the sub’s buoyancy, are located between the inner and outer hulls.

To stay in control and stable, a submerged submarine must maintain a condition called trim. This means its weight must be perfectly balanced throughout the whole ship. It cannot be too light or too heavy aft or too light or too heavy forward. The submarine’s crew must continually work to keep the submarine trim because burning fuel and using supplies affect the sub’s distribution. Tanks called trim tanks, one forward (front half of boat) and one aft (back half of boat), help keep trim by allowing water to be added or expelled from them as needed.

Once the submarine is underwater, it has two controls used for steering. The rudder controls side-to-side turning, or yaw, and diving planes, control the sub’s rise and descent, or pitch. There are two sets of diving planes, the sail planes, which are located on the sail, and the stern planes, which are located at the stern (back) of the boat with the rudder and propeller. Some submarines, including the new Virginia class, make use of bow planes (diving planes located at the bow, or front of the boat) rather than sail planes.

As you will notice on the above diagram of a submarine, it has a tall sail that rises out of the submarine’s hull. Inside this fin-shaped sail is the conning tower (“conn” means to direct the steering of a vessel). The periscope and radio and radar antennas are usually extended through the conning tower. In the past, many of the controls used to operate submarine while on the surface were located here.

As advances in technology are made, the look and operation of submarines change. A major breakthrough in the new Virginia-class submarines is the use of Photonics Masts, eliminating the need for a conventional periscope. Instead of a Sailor on a Virginia-class boat using a series of mirrors and lens to view above the surface, several high-resolution, color cameras will send visual images to large screen displays in the ship’s control room via fiber optics.

Archimedes’ principle is the law of buoyancy. It states that “any body partially or completely submerged in a fluid is buoyed up by a force equal to the weight of the fluid displaced by the body.” The weight of an object acts downward, and the buoyant force provided by the displaced fluid acts upward. If these two forces are equal, the object floats. Density is defined as weight per volume. If the density of an object exceeds the density of water, the object will sink. Whether a submarine is floating or submerging depends on the ship’s buoyancy. Buoyancy is controlled by the ballast tanks, which are found between the submarine’s inner and outer hulls.

A submarine resting on the surface has positive buoyancy, which means it is less dense than the water around it and will float. At this time, the ballast tanks are mainly full of air.

To submerge, the submarine must have negative buoyancy. Vents on top of the ballast tanks are opened. Seawater coming in through the flood ports forces air out the vents, and the submarine begins to sink.

The submarine ballast tanks now filled with seawater is denser than the surrounding water. The exact depth can be controlled by adjusting the water to air ratio in the ballast tanks. Submerged, the submarine can obtain neutral buoyancy. That means the weight of the submarine equals the amount of water it displaces. The submarine will neither rise nor sink in this state.

To make the submarine rise again, compressed air is simply blown into the tanks forcing the seawater out. The submarine gains positive buoyancy, becomes less dense than the water and rises.

The very first submarines depended on people for the energy to move. Cornelius van Drebbel, whose submarine was tested on the Thames in 1620 and reported to have carried the King of England on one of its dives, used oars to move itself along. The oars extended from the craft and leather gaskets sealed the point of their emergence.

In the mid-1770s, David Bushnell built a submarine Turtle that used hand and foot cranks for propulsion. This one-person submarine, which was the first to be used during war, was very inefficient and exhausted its operator in a short time.

Robert Fulton developed a three-person submarine Nautilus in the early 1800s that was the first to use diving planes to control depth. While submerged, it relied on a hand crank to move it along. For travel on the surface, the Nautilus was equipped with a sail.

Fulton then tried to build a more efficient submarine using steam. Though the steam engine was actually small, the boiler, which supplied the steam, was large and bulky. Since oxygen was required for the fire, which in turn was required for steam, the submarine had to remain at the surface to operate the engines. To dive, the fires were extinguished and the smokestacks closed. The submarine was left with no power.

In the 1860s, the Confederates built steam-powered submarines, known as Davids. The name was in reference to the Bible story where David defeated the giant Goliath. These Davids were made to fight the Goliath Union fleet. These submarines never completely submerged, but kept their air-intake pipes and smokestacks above the water’s surface. By doing this, the fires to operate the steam engines never had to be extinguished.

The electric engine allowed the submarine to travel underwater for a longer period of time, maybe a few hours, at a decent speed, and it produced no toxic fumes. The engine was relatively small, but the batteries were not. They were large, bulky and heavy, and many were required to supply power to the motor. Since they lost their charge within a few hours, the submarine would have to return to the surface often to recharge.

Batteries presented other problems, since they emitted toxic fumes when contaminated with seawater, and they always contained dangerous acids.

Because both were dangerous, steam and gasoline engines were phased out for less-volatile diesel engines. In 1904, the French became the first to build a submarine Aigrette, which used a diesel engine on surface and an electric engine while underwater. The U.S. followed the trend building its first diesel-powered sub, the F-class Skipjack, in 1911. The diesel engine supplied steam, which turned turbines to produce the electricity to heat, light and power the sub. These diesel engines burned oil instead of gas so they had less toxic fumes, were more economical and did not use a complicated sparking system. However, diesel engines could not be used underwater because they needed air for combustion and did produced some toxic fumes. Instead, electric batteries were used when a submarine was underwater.

In 1954, the U.S. commissioned the first nuclear-powered submarine, the USS Nautilus. Because nuclear-powered engines required no air, the submarine could stay submerged indefinitely, surfacing only when in need of supplies. The Nautilus could travel at speeds of 23 knots surfaced and submerged.

A nuclear-powered engine works because heat is generated by the fissioning of the nuclear fuel. Two systems of pressurized water are sent through the nuclear engine. The first, or primary, system circulates water through the reactor, piping loops, pumps and finally to the steam generators, where the heat from the reactor is transferred to the secondary water system. The water from the primary system is then directed back to the reactor to be heated again. The heat transferred to the secondary system creates steam. This steam supplies the ship with electricity and propulsion when it moves through the turbine generators and propulsion turbines, respectively. The steam, condensed back to water, returns to the steam generators to be reheated.