MarineBio is proud to present Essays on Wildlife Conservation written and edited by Dr. Peter Moyle, et al. for an introductory course on wildlife conservation taught at the University of California, Davis.

The essays were written for students who are not only biology majors and are broad in scope. These chapters provide an introduction to the history of wildlife in North America, biodiversity, natural selection, conservation biology, ecology, conservation legislation, alien species, wildlife and pollution, and things we can all do to save wildlife. We think you will find that they are not only fascinating to read but also very useful toward understanding the myriad of issues concerning conservation efforts today. 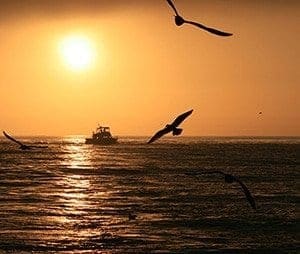 Instructors teaching similar courses are welcome to use this material and to modify it to better suit their course needs. In particular, examples from California should be replaced at least in part with examples from your own region. Dr. Moyle, editor of these essays, is happy to provide educators with electronic versions in MS Word or on CD if you want all chapters.

If you do use these readings, please inform Dr. Moyle (pbmoyle@ucdavis.edu). If you significantly modify the essays, please provide Dr. Moyle with an electronic copy of your final version (or a link to it). Comments and corrections are always welcome.

These particular essays are copyrighted by the Regents, University of California, but the only stipulation I have about their use for non-profit purposes is that their source be acknowledged.

About Peter Moyle, PhD.
Peter Moyle has been studying the ecology and conservation of freshwater and estuarine fishes in California for over 30 years. He has documented the declining status of many native species in California as well as the invasions of alien species. The interactions among native and alien species in environments with varying degrees of disturbance have provided the basis for his ecological studies. Dr. Moyle served as member of the Sierra Nevada Ecosystem Project science team (1994-1996), developing strategies for the conservation of fish, amphibians, and watersheds in the mountain range that forms the state’s backbone (and main source of water). He is currently a member of the Independent Science Board for the CALFED Ecosystem Restoration Program, which advises a consortium of state and federal agencies on restoration activities for the Sacramento-San Joaquin watershed, one of the largest aquatic restoration projects ever attempted. He is author/coauthor of over 150 scientific papers and 5 books. For those of you who fish, keep an aquarium or just admire fish for what they are, he shamelessly recommends his Fish: an enthusiast’s guide, a cheap paperback published by University of California Press. The completely revised and updated version of his book Inland Fishes of California was recently published by the Press as well (2002). He is a professor of fish biology in the Department of Wildlife, Fish, and Conservation Biology, University of California, Davis, where he teaches basic courses in ichthyology, wildlife conservation and watershed ecology.

Foreword: A Reader on Wildlife Conservation

The dodo was a large flightless pigeon that once inhabited the remote island of Mauritius. It was clubbed into extinction by sailors in the 17th century for food and sport. The dodo is remembered today mainly as a symbol of stupidity: it was too dumb to get out of the way of humans and was therefore wiped out. Unfortunately, most species sharing this island planet with us are dodos. They cannot get out of the way of human “progress” and will be beaten to extinction unless we actively protect them and their habitats. The essays that follow attempt to demonstrate why this last statement is true and also describe how humans and other forms of life are interdependent. They also provide some ethical and practical tools you can use to help improve the situation. If you choose not to be consciously involved in the conservation of forms of life other than your own, you should at least be aware that by doing nothing you are still having an impact on the biota of this planet. The water you drink, the food you eat, the land you live on, and the air you pollute were all obtained at the expense of other creatures. The decisions we make today on how we are going to share these resources will determine which other species will inhabit Earth for the indefinite future. 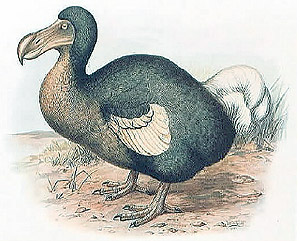 The dodo from Mauritius, an island in the Indian Ocean. These birds stood about 1 m high and weighed 20-25 kg. Modern reconstructions suggest dodos were slimmer than the bird shown here. Copyright © 2002-2004 Encyclopaedia Mauritiana

The course for which this reader was written, WFC 10, has been taught at the University of California Davis since about 1970. The change in subject matter over the short period of time since its inception reflects the change in the attitudes towards wild vertebrates (wildlife) of biologists, wildlife managers and the public. The earliest versions of the course were concerned primarily with economically important species such as deer, ducks, trout, and salmon and how to manage them to provide maximum harvest. Endangered species and environmental degradation were discussed only as a minor component of the lectures. Gradually the emphasis has shifted. The management of economically important species of wildlife is still discussed in the course but in the context of a concern for the preservation of all wildlife, from the most obscure species of small fish to spectacular predators like mountain lions. The course does focus on vertebrates as the traditional “wildlife”, but vertebrates should be regarded mainly as the forms of life with which we have the most empathy, being vertebrates ourselves. The conservation problems we are having with vertebrates are problems we are having with all forms of life and their interactions with each other (biodiversity). The conservation of biodiversity is the subject of a new, rapidly growing field called Conservation Biology. Conservation Biology gets its theory from ecology and the social sciences, its applied orientation from traditional wildlife and wildland management, and its ethics and energy from the environmental movement. This course is now in many respects a course in conservation biology, emphasizing vertebrates.

The essays in this electronic book have the following progression. The first two essays deal with the history of human-wildlife interactions. These are followed by a series of essays on basic biogeography, ecology, and evolution. The remaining essays deal with conservation problems and how to solve them. The final essay is about what you can do at a personal level to affect positive change. To round out these readings, various published papers, book chapters, essays, and other materials are used.

ACKNOWLEDGEMENTS
The first versions of many of these essays were produced in graduate seminar in textbook writing in 1990, by Dianne Leonard, Robert J. Meese, Tim F. Ginnett, Anitra Pawley, Anne Brasher, Steve Ellsworth, Michael Brown, and Jay Davis. The chapters have gone through several major revisions since that time. Douglas Kelt, who also teaches this WFC 10, has provided input on many aspects of the course and wrote the chapter on biogeography. Mary Orland helped to produce this particular version, as a postdoctoral scholar funded through the endowment for the President’s Chair in Undergraduate Education, co-held in 2003-2006 by myself and Jeffrey Mount of Geology. I am also appreciative of the many graduate student teaching assistants and undergraduate students who read the chapters and pointed out errors of commission and omission, thus helping to make these essays into dynamic documents. Further comments are always welcome.