Ecosystems are controlled by a multitude of factors, each influencing the other. Almost all living organisms rely on the energy from the sun.

Organisms at the base of the food chain, such as phytoplankton and plants, use the sun’s energy directly. Organisms higher on the food chain receive energy from the sun indirectly.

The only organisms on the planet capable of producing energy without the sun are microorganisms called chemoautotrophs that often live near deep sea vents and synthesize energy through a chemical process. Within an ecosystem there are trophic levels based on feeding relationships including producers, primary consumers, secondary consumers, tertiary consumers, and decomposers. Many organisms consume both plants and animals (omnivores) and prey on a variety of species to avoid starvation in case their primary prey becomes scarce; therefore they are sometimes categorized into more than one trophic level depending on the circumstances. Abiotic factors like temperature, light, nutrients, and salinity play a large part in the control of growth, location, and abundance of marine populations. Lastly, species within a population are also regulated by competition, predation, parasitism and disease. Every part of the complex web of biotic and abiotic factors fits together to make a system that is balanced and capable of withstanding most changes.

There are thousands of species of primary producers in the ocean that convert inorganic carbon into organic compounds. Phytoplankton are responsible for 95% of all primary production and use energy from the sun directly. These primary producers absorb energy from the sun through pigments inside the chloroplasts or through membranes in the cytoplasm of bacterial cells. Other organisms capable of transforming inorganic material into a food source in the food chain include bottom-dwelling benthic algae, macroalgae and seaweeds, symbiotic producers like corals, and more complex plants like seagrasses. Because the ocean covers 71% of this planet, phytoplankton are widely viewed as the most crucial component of the food web. 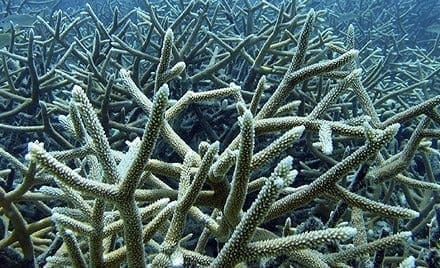 The intensity of sunlight, or irradiance, is an important factor for primary production in the ocean. Irradiance is measured in photons arriving per square meter per second, and varies depending on the time of day, the season, and weather conditions. The photic zone is that portion of the ocean that receives sunlight. Only low levels of light reach the deeper layers of the ocean because most of the light is absorbed by algae just below the surface and as depth increases light is absorbed by the water itself. When fewer algae are present, the photic zone extends deeper. The depth of the photic zone can also be affected by seasonal mixing of ocean waters. In the spring, for example, deep water is circulated toward the surface reducing sunlight penetration due to suspension of particles from the bottom. Most primary production occurs within a depth of 200 m. 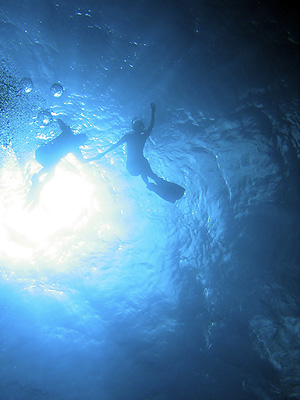 Primary producers are limited in the amount of sunlight they can use; therefore, primary production slows as this limit is reached. Bluegreen algae and dinoflagellates are saturated by light at low levels, while diatoms (an important phytoplankton species) tolerate more light. Although green algae continue to increase production until they reach their maximum light intensity levels, most algae are negatively affected by UV rays and grow more slowly in full sunlight. The loss of the ozone layer over the Arctic and Antarctic oceans could be extremely detrimental as increased UV levels slow primary production.

Some organisms have the remarkable ability to adapt to increased sunlight by increasing or changing the number of photosynthetic pigments (accessory pigments) available for capturing the sunlight. By adapting this way, the organisms are able to capture more light and increase their productivity. Additionally, some primary producers have been observed using a light capturing antennae.

Climate and the Environment

Ecological marine communities are each unique, but can be categorized into general cycles. The physical climate plays an important role in these cycles.

Seasonal cycles begin when light increases in the spring and causes higher surface temperatures, which result in increased metabolism and therefore, growth rates of organisms. Phytoplankton growth slows as surface temperatures cool in the fall. In shallow ocean waters where nutrients are typically plentiful, cycles of growth are mostly determined by the intensity of light. Short-term increases in production occur during summer when ocean layers are mixed by meteorological events, tides in estuaries, or upwellings of colder waters. These short bursts affect the entire food web above primary producers.

Species Interactions in the Ecosystem

Species in the ocean interact within the ecosystem in a number of ways. These interactions are categorized according to the effect the interaction has on each species, the duration, and the nature of the relationship. 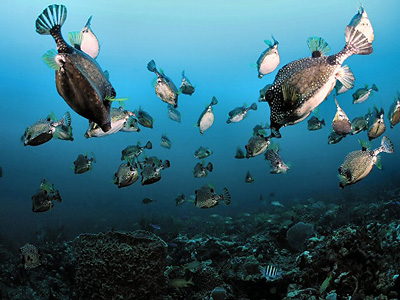 The effects of species interactions are classified as zero effect, positive effect, or negative effect: 0, +, or – respectively: neutralism (0,0), amensalism (-,0), commensalism (+,0), synnecrosis (-,-), Mutualism (+,+), Predation (+,-) and Parasitism (-,+). The duration of these interactions range from brief, such as when a flowering plant is pollinated, to permanent, as with most symbiotic organisms.

Resource partitioning occurs when species divide resources among the population to ensure its survival as a whole. Populations able to share a habitat, source of food, and other resources tend to survive. The observation of resource partitioning in ecosystems led to Gause’s competitive exclusion principle, which states that “if two species, with the same niche, coexist in the same ecosystem, then one will be excluded from the community due to intense competition”. This principle means that species with similar requirements cannot exist in the same habitat. If one species is more efficient at using the shared resource, it will drive the other to extinction in the niche. In this case the term “niche” is used to mean all of the abiotic and biotic factors present in the environment as well as predation and disease.

Other interesting population interactions include the different forms of parasitism and disease. With parasitism, the parasite lives off of the host and when it has collected enough nutrients to survive and reproduce it leaves the host. In parasitoid relationships, the host is usually overcome by the organism and eventually dies.

In spite of the scientific organization and categorization of food webs, they remain incredibly complicated. Energy and matter flow between species in many ways and the abundance of species is always changing. Biotic and abiotic factors work together to regulate the survival of certain species. Resource availability and predation play a major role in ecological regulation, and species must constantly adapt to their environment. Ecologists often look at ecological control of the food web using a “top down” view or a “bottom up” view. The top down view suggests that predators control the numbers of organisms through consumption. The bottom up view means that the quality and availablity of food dictates the numbers of organisms above in the food web. The cascade effect in food webs describes the impact that predators higher in the food chain have on lower trophic levels. For example, the ecosystem may become imbalanced if one species does not consume much of its prey (for various reasons) which could cause that prey population size to increase to limits that cause problems for other species, etc.

An example of an ecosystem and its abiotic factors include shoreline ecosystems, which are harsh environments. Organisms surviving here must be able to withstand strong waves, high intensity light, and sandy, rocky, or icy substrates. Barnacles, mussels, and shellfish adapt to this environment by latching on to substrate with strong appendages. Ghost crabs have adapted by burying themselves in the sand to avoid being carried away by waves. Coral reefs, which provide a home for about 40% of all fish in the sea, are extremely sensitive to changes in the abiotic factors that affect them, such as temperature and chemical make-up of the water. Creatures of the deep sea are particularly well adapted to their environment and to their abiotic factors. They must survive with no sunlight, cold temperatures, and extreme pressure. Nevertheless, this ocean region is home to a variety of bioluminescent fish, chemoautotrophic bacteria, and other mysterious and strange creatures.

Salt marsh and estuary ecosystems are found where fresh water mixes with salt water. Salt marshes are filled with grasses in a shallow and muddy environment. There is an abundance of nutrients and a high level of protection here for juvenile species to develop. The deeper and less sheltered estuaries contain oysters, clams, crabs, and larger animals like the manatee.

How is this allowed? Some of these sharks must be on the endangered list. At the very least, people who take pleasure in harming innocent, trusting lives are sick and should be in locked treatment facilities or prison. People who are cruel to other people ALL started with heartless cruelty to animals. Her level of delight in hurting these animals is a dangerous sociopathology.

Sick b*tc#! Not surprising that she's from Florida.

I hope you fall in and get eaten by a great white.

None to bright that one. She needs to study the eco system and realise just how they are essential these magnificent creatures are .

Why would you think this is something fun to do? Do you feel mighty when you catch them or hunt other animals?

What is her goal? To look badass? She’s achieved the opposite. Ugh.

She's scum. Sick in the head. Sorry excuse for a human.

Hope she gets eaten...what a sick human being

Simply feed her to the sharks!

Obviously needs to be fed to them!

Greta Thunberg: ‘It just spiralled out of control’ | Free to read

How graceful and magical 💛

What a beautiful beautiful work of art. There has to be a Creator!!! Wow!!!

Everybody’s got top eat, but isn’t this out of the normal food chain for orcas?

I don’t know about y’all but I counted 36. Has any body else counted 36? Asking for myself of course.

Orcas are the wolf of the sea! That is normal!!

Cant the blue whale just dive deep fitter than the orcas can go?

75 orcas seems a bit of exaggeration. Or how did they know they were 75 in total? Perhaps it was a whole pack of orcas with a number of 20-25 individuals?

Normal and amazing shouldn’t be any sad faces

I don't know about pods of 75 attacking a fully grown whale but Orcas are factually known to hunt and kill infant Blue Whales (adults are too large).They pursue,then drown the calf.

They didn't call them *whale killers* for nothing!