All organisms in an ecosystem can be placed in trophic levels depending on what energy source they rely upon and how they provide energy for other organisms in the food web.

With the exception of life near hydrothermal vents in the deep ocean, life is always dependent directly or indirectly on the energy from the sun.

All organisms in an ecosystem can be placed in trophic levels depending on what energy source they rely upon and how they provide energy for other organisms in the food web. With the exception of life near hydrothermal vents in the deep ocean, life is always dependent directly or indirectly on the energy from the sun. In every ecosystem, there is an organism at the lowest level that converts energy from the sun into useable energy for other organisms. For example, phytoplankton are photosynthesizers that provide energy for a vast number of primary consumers, which in turn provide energy for secondary consumers and decomposers. Biologists study how energy is used in the food chain, known as the economy of energy.

The food chain consists of trophic levels, or the levels within the food chain in which energy is transformed. Due to basic principles of thermodynamics, energy is always lost to the environment any time an organism at one trophic level uses the energy from the trophic level below. For example, the energy gained by animals that eat phytoplankton is less than the amount of energy initially available. Every trophic level loses energy, so trophic levels are often illustrated as a triangle with primary producers forming the base.

Components of an Ecosystem

There are four parts to every ecosystem: the abiotic environment (e.g. geology or geography), producers (e.g. phytoplankton), consumers (e.g. shrimp) and decomposers (e.g. bacteria). Energy from the sun and abiotic nutrients such as carbon dioxide or minerals are taken in by producers and transformed into usable energy through photosynthesis. Consumers, like herbivores, are dependent on producers to convert sunlight, water, and carbon dioxide into glucose, which can be then be divided through respiration to recover the sun’s energy. Carnivores are secondary consumers if they only prey on herbivores and tertiary consumers if they eat other carnivores. Decomposers, the organisms responsible for decomposing dead animal and plant matter, are able to break down organic waste back into minerals that can be used by producers.

Trophic levels begin wtih phytoplankton, a primary producer capable of transforming inorganic carbon into protoplasm. Zooplankton is the second level because they eat phytoplankton and are a source of energy for crustaceans at the third level. The fourth level is fish that eat crustaceans and the fifth is seals and other animals that eat fish. The more trophic levels present, the less energy is conserved at higher trophic levels. 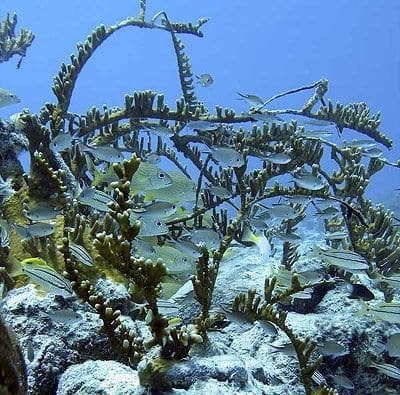 With a few exceptions, every species fits into the ecosystem as something consumed and something that consumes other things. Many prey are eaten by more than a single predator and most predators have diversified to eat more than one type of prey. The amount of biodiversity in an ecosystem is directly related to its degree of stability. When organisms eat a variety of foods, the loss of one type of prey is not as devastating to the overall ecosystem. Biodiversity can be lost through destruction of habitats, overexploitation, biological activity that upsets the balance of the ecosystem such as an invasive species, and pollution. Biodiversity loss upsets the balance of ecosystems, which is why it’s important to ensure its sustainability in the ocean.

When biomass is produced through photosynthesis, the amount can be measured in terms of primary production. Areas very important to the production of biomass on Earth are tropical rain forests with 2,000 g/m²/yr; algal beds and reefs with 2000 g/m²/yr; swamps and marshes with 2,500 g/m²/yr; river estuaries with 1,800 g/m²/yr; temperate forests with 1,200 g/m²/yr and cultivated lands with 600 g/m²/yr. The least amount of biomass production occurs in the desert and frozen areas of the Earth. 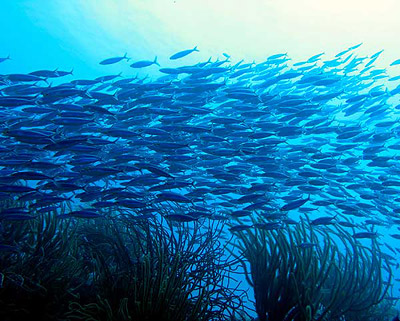 Organisms like the photolithotrophic cyanobacteria, can be any combination of the terms above. Fungi are chemo-organo-heterotrophic and plants are photoautotrophic, names that give significant information about their place in the ecosystem. All animals or “eukaryotes” are heterotrophic, meaning they feed on organic matter. Certain types of algae can switch from being photolithoautotrophic in the light to chemoorganoheterotrophic in the dark. Trophic levels and the exchange of energy are a powerful example of nature’s adaptability and the reason for the protection of biodiversity across ecosystems.