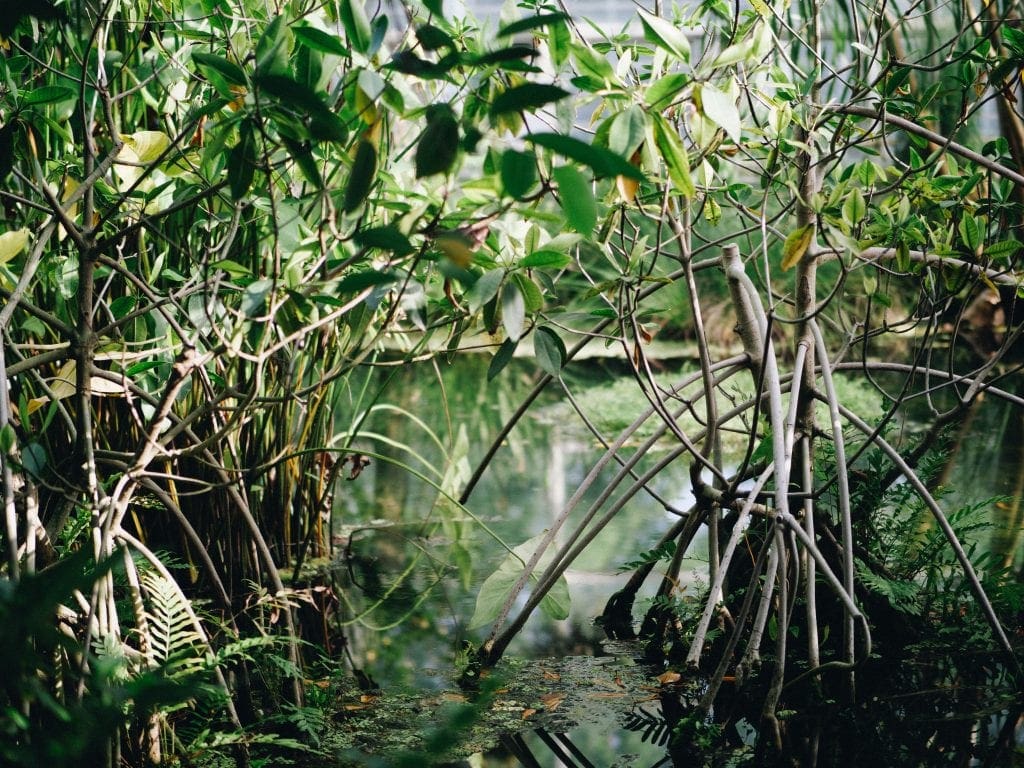 Grazers and predators form the backbone of food webs and influence ecosystems in very different ways. Predation is a top-down force...

Grazers on inorganic nutrients like nitrogen and phosphorus like primary producers exert a bottom-up force. Nutrient levels impact the food chain or a given food web depending on how many grazers are present, how many trophic levels exist, and how grazers react to an increase in resources. The number of grazers in the food chain is regulated by the number predators.

Land ecosystems and marine ecosystems share the cyclic flow of energy, the loss of energy from primary production to predators and the interwoven webs of activity. The first obvious difference between the two is that one is on land or “terrestrial” and the other is in the water. Terrestrial food chains differ from marine food chains because of the latter’s dependence on phytoplankton. A simplified example of a marine food chain would start with phytoplankton eaten by copepods eaten by fish eaten by squid eaten by seals eaten by orca.

A food web describes these complex interactions more accurately than a food chain. A food web illustrates the energy transferred between organisms and the hierarchy of organisms occupying different levels based on their prey. Much marine ecological research is based on food webs. There has been much controversy surrounding the accuracy of these illustrations. The basic concept of food webs eventually evolved into two types of food webs in the ocean. The first is based on plankton primary production and the second is based on detritus primary production.

The Importance of Grazers

The older model of a food web in the ocean depicted planktonic algae grazed on by planktonic crustaceans (also known as copepods). The copepods were eaten by fish and invertebrates. Organisms at the top of the food chain were larger animals (predators). Modern food webs have replaced the less accurate food chains and show how important smaller autotrophic and heterotrophic organisms are to primary and secondary production as well as to the carbon and nitrogen cycle. It is now clear that primary production in planktonic food webs is divided between many different sizes of organisms. Cyanobacteria may be just as important to the productivity of ocean ecosystems as phytoplankton. Microbially based food webs formed by the grazing of protozoa like microflagellates and ciliates on smaller autotrophs have also been taken into account.

Now that the classical food chain has been updated, it is clear to scientists that most of the autotrophic production and grazing is actually controlled by microscopic organisms rather than the larger predators in the food web. Macrophytes are algae that can be seen without a microscope commonly studied in salt marshes, mangrove and seagrass ecosystems.

A commonly studied example of a macrophyte-based food web is the salt marsh, where there is abundant primary production based on detritus in the form of decomposed plants and small organic particles. These particles come mostly from vascular plants and are responsible for feeding many different types of microbes including ciliates, flagellates, bacteria, and other protozoa. Organisms like crustaceans, fish, mollusks, and gastropods rely on these microbes for food energy. Even the highly productive estuaries are largely dependent on the detritus-based primary production coming from salt marshes in addition to phytoplankton production in the ocean.

Estuaries and marine ecosystems closer to shore contain the largest amounts of primary and secondary production. In the open ocean, there is less production in the same amount of space. Food webs in the water column or at the bottom of the ocean are highly dependent on the primary production occurring above in the photic zone. The most productive areas in the open ocean are found in near upwellings where conditions are favorable for food webs to continue for long periods of time.

Grazers regulate the effects of unwanted algal blooms resulting from phosphorus pollution in marine ecosystems. If there are too many predators in a lake, like largemouth bass, all of the grazers will be eaten and the algal bloom will take over. There is a delicate balance in ecosystems because fish that eat algae can be depleted if there are too many predators and algae can be depleted if there are no predators to eat the grazers. Although it might be easy to predict how many plants and algae would be produced by an increase in the nutrient supply in a marine ecosystem, the net biomass produced actually depends on many factors including the trophic structure and abundance of predators. In ecosystems lacking nutrients, top-down control of primary production is more powerful and in nutrient-rich ecosystems, bottom-up control is more important.

The Importance of Predators

In marine environments and on land, predators keep grazers from depleting resources. Thus, the role of predators is crucial to the survival of the ecosystem. This theory in ecology is known as “the world is green” theory but also applies to the oceans. The actual number of trophic levels is important to the impact of grazers on primary production. The control of primary production by predators at the top of the food web is called the “trophic cascade”. The trophic cascade is a phenomenon that exists in lakes, subtidal kelp forests, streams, older meadows, the arctic tundra, habitats with coastal shrubs, grassland savannas, soil communities and in the ocean. If the keystone predator is removed from these systems, there will be a loss of species diversity at trophic levels lower in the food web.

The loss of sea otters in an ecosystem near the coast causes dramatic changes in the coastal ecosystems. For example, in areas where sea otters had been removed sea urchin populations have proliferated out of control. The sea urchins grazed freely on benthic algae depleting it from these environments, disrupting the food web by leaving little food for other organisms.