The introduction of non-native species to an ecosystem is one of the major causes of decreased biodiversity. By Fiona Durnford (July, 2020)

Termed alien species, they are also known as exotic, introduced, non-indigenous, or invasive species. As the names imply, these species do not belong to ecosystems in which they are either intentionally or unintentionally placed. They tend to disrupt the ecosystem’s balance by multiplying rapidly. These species are often plants, fishes, mollusks, crustaceans, algae, bacteria or viruses.

When humans began to travel, they started to bring other species and diseases along with them like rats and marine organisms, such as polychaete worms, barnacles and seaweeds, often without realizing. Sometimes, humans introduce non-indigenous species to a new area for the purpose of pest control, live-stock or as pets. The primary cause of marine species entering new waters is by a ride in the ballast tank of ships and biofouling (the accumulation of microorganisms, algae or small animals on a wet surface). Other causes are aquaculture, the marine species trade and marine organisms hitching a ride on (plastic) litter or aquarium releases.

Only a small amount of the largely introduced and transported marine species become established. Before the species can establish itself, they must be rigid enough to withstand their new surroundings and often submit to behavioral and physiological adaptation. Factors for a marine species to become well established include, their ability or adaptation for reproduction dispersal, adaptability to food sources, how they respond to certain temperatures and also any salinity and disturbance in their new surroundings and during transport. When they can withstand these challenges, they must compete with possible local predators or face foreign detrimental pathogens or parasites.

A species is invasive when it harms the economy of a country or indigenous plants and animals. However, non-indigenous species have also had beneficial effects on an ecosystem. For instance, non-indigenous birds in Hawaii spreading indigenous plant seeds and some non-indigenous worms and mollusks have improved water quality. Conservationists have therefore been researching and documenting ways in which a non-indigenous species can positively be used for conservation purposes. Nevertheless, it is hard to predict any future effects that may occur with these biotic interactions, due to the possibility of the conditions in the environment changing over time. Non-indigenous species may not always be harmful, but research shows the enormous declines in native biodiversity caused by invasive species is well and extensively documented. Biodiversity is important to keep our ecosystem healthy. It ensures our air stays fresh and our crops are plentiful. There are currently 1.6 billion people globally who rely on the ecosystem for everyday life. Humans need a healthy ecosystem. It is essential then, that we look out for all organisms within the ecosystem. From plants to microscopic organisms and animals, taking one out of or adding one into the equation can be disastrous. 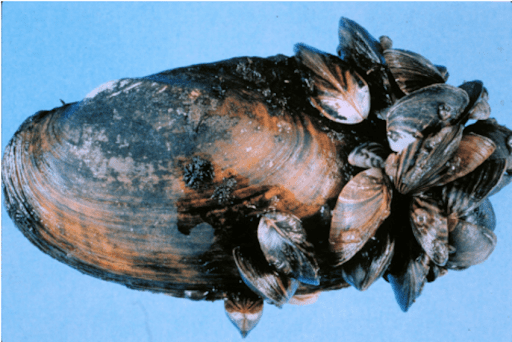 One of the most studied events of invasive species is the introduction of the Nile perch to Lake Victoria, Africa. The Nile perch (Lates niloticus) originates from the Senegal river, Congo river, Volta river and Nile river as well as Lake Chad and Lake Mariout in Egypt and was introduced in Lake Victoria in Africa in the 1950s. This species’ rapid growth in Lake Victoria in the 1980s, caused an extinction event of roughly two-hundred native vertebrate species in less than ten years. The consequence that followed, was an irreversible change in Lake Victoria’s ecosystem. Although overfishing has also been a factor in the decline, the Nile perch preyed on the fish that was left and by doing so prevented the overfished species from recovering. An example of this is the indigenous Tilapia species. Their population had already been decreased due to overfishing, before the Nile perch had fully settled in the lake. The Nile perch, however, is directly responsible for the immense decline in haplochromine cichlids that were a flourishing species before the Nile perch inhabited the waters of the lake. 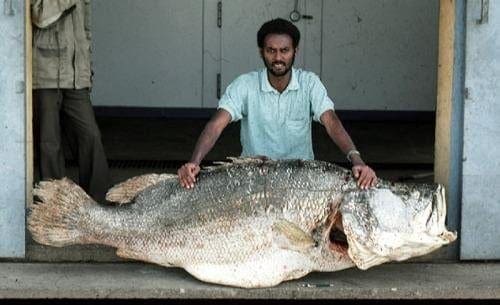 When we think of marine species we often think of fish and marine mammals, but marine life, like all life, comes in different forms. Marine algae are an important part of the ecosystem and when they become invasive or are overrun by invasive algae species it can have a dramatic effect on the biodiversity of an ecosystem and its trophic hierarchy.

In the 80s an alga named Caulerpa taxifolia (Vahl) C. Agardh (nicknamed the killer alga) which was indigenous to tropic waters, became a very popular plant in the aquarium industry. It soon ended up in the Mediterranean, possibly by aquarium release. The alga spread rapidly throughout Mediterranean cities by water currents, transported by ballast tanks and getting fragmented due to contact with fishing lines and Anchors. This situation is made worse by the fact the alga has no natural predator, because it releases a toxin when approached by fish. It is also because of this trait of the alga that the native fish can’t reach the native seaweed that they feed on. This causes a decline in native fish and therefore a decline in biodiversity. It is therefore called killer alga.

Over 60 macroalgal species have been introduced to the Mediterranean Sea, a large number of these exotic species became established and invasive. This has had a huge impact on the abundance of native species and will presumably alter the structure of indigenous benthic populations. 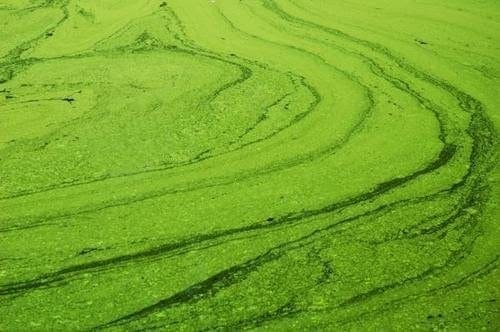 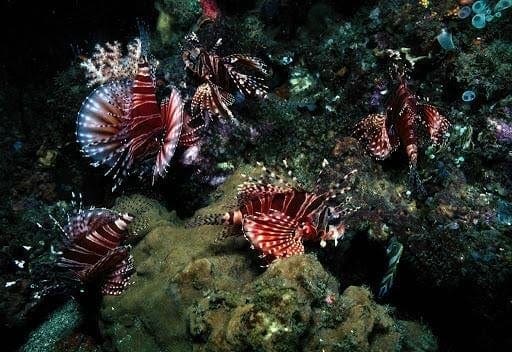 Red Lionfish forming a small school on a reef.

Lionfish originate within the Indo-pacific region. In the mid 1980’s to the early 1990’s the Lionfish was detected for the first time in Florida. After researchers studied recorded sightings and the specimens reported, they concluded that the Lionfish in Florida most likely entered the water by aquarium releases. In 2006 the animal had settled along the Western Atlantic, Caribbean Sea and Gulf of Mexico.  It is uncommon for a vertebrate predatory species to successfully invade a marine ecosystem, yet the Lionfish manages to establish itself rapidly through larval dispersal across the Western Atlantic. They are highly fertile and produce egg masses and pelagic larvae with high growth rates.

Lionfish are found on hard surfaces like coral, rocks and for instance shipwrecks as well as habitats like mangroves and sand substrata down to a depth of 600 meters. They have a hunting technique that allows them to generate jets of water and aim this at their prey. The Lionfish slowly approaches prey and use this technique to confuse or distract their prey. This results in their prey facing the Lionfish. This makes the fish slower to respond because the fish has to turn to make a quick exit and makes it easier for the lionfish to capture their prey. Their long poisonous spines and remarkable brownish-crimson coloration, white stripes and fanned fins gives the animal a distinct look, which helps to discourage predators from feeding on them. Their diet consists of over 50 species of fish. Some of these fish are ecologically and economically important such as Damselfish Pomacentridae, the surgeonfish Paracanthurus hepatus and the Parrotfish Scaridae. Prey fish populations are linked to the marine ecosystem services, such as nutrient cycles, oxygen production and climate control. Lionfish mainly eat small teleost fish such as Gobiids, Labrids and Grammatids, but also feed on mollusks, crustaceans and young bony fish. It seems that it will take time for the prey in the invaded range to adapt to this predator. The ecosystem in the Atlantic however, cannot keep up with the fast dispersal of the Lionfish. Important reef species are disappearing at an alarming rate and in the absence of a natural predator, the Lionfish will continue a destructive path.

Impacts on human health and the economy

Invasive species have been associated with impacts on tourism, marine infrastructure activities, aquaculture and altering fisheries, resulting in a loss of income and profits. In Europe and North America, the swim bladder nematode, Anguillicola craccus (roundworm), native to Asia, has been imported into local waters and is now infecting eels in aquaculture. Another example is the collapse of local fisheries in the Black sea due to the invasion of comb jellyfish, Mnemiopsis leidyi, resulting in a loss of millions of dollars annually. A crab originating from Europe, Carcinus maenas, is believed to be the cause of bivalve fisheries collapsing on the North American east coast.

Invasive species can also indirectly or directly weaken human health. In Lake Gatun, Panama, after the introduction of the Peacock Bass Cichla in 1968, the population of the Mosquitofish Gambusia affinis started to diminish, resulting in an increased mosquito population that carried mosquito-born illnesses like Malaria. Human health can also be affected by viral bacterial pathogens and dinoflagellates that are transported in the ballast water of ships. Bacteria can cause cholera and dinoflagellates can cause shellfish poisoning and harmful algal blooms. Sometimes invasive species are host to parasites that affect human health. The Chinese mitten crab, for example, is an intermediate host that has settled in Europe and carries the human liver fluke.

What can you do?

How eating Lionfish helps the environment:

Some of the threats that harm biodiversity: 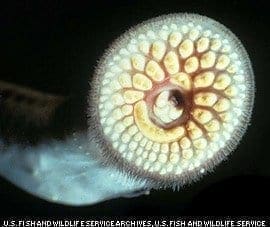 NOAA (2018) What is a Lionfish? Available at: https://oceanservice.noaa.gov/facts/lionfish-facts.html [Accessed 08 February 2020].