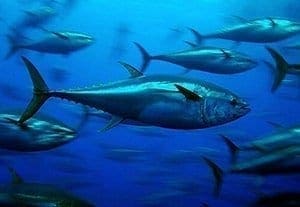 I loved this satrical article in: the Ethicurean: Chew the Right Thing. Yes, yes it’s satire, and funny – but not – because it’s close to the truth. Here’s a humorous excerpt:

Nibbling from trays of sushi containing realistic-looking tuna substitutes such as raw beef and watermelon, guests acknowledged a debt of gratitude to the delicious fish. Many insisted they hadn’t taken the privilege for granted. “The extinction of the bluefin must serve as a wake-up call for all of us,” stated film producer Devon Gillespie. “With so many delicious creatures in the sea, I believe we owe it to our children to enjoy as many of them as possible before they’re gone forever. I’ve already installed a second freezer at my house, just for abalone and Chilean sea bass!”

Bluefin tuna fish stocks have declined so much in the eastern Atlantic and Mediterranean seas that for the second year in a row, the European Union is closing the Bluefin tuna fishing season early. The season normally lasts until September, but as of June 16 Greece, France, Cyprus, Spain, Malta and Italy will be banned from bluefin tuna fishing.

And this seems as good a time as any to mention Richard Ellis’ new book “Tuna: A Love Story,” which is coming out in July. From the book description on Amazon:

The author of The Book of Sharks, Imagining Atlantis, and Encyclopedia of the Sea turns his gaze to the tuna—one of the biggest, fastest, and most highly evolved marine animals and the source of some of the world’s most popular delicacies—now hovering on the brink of extinction. In recent years, the tuna’s place on our palates has come under scrutiny, as we grow increasingly aware of our own health and the health of our planet. Here, Ellis explains how a fish that was once able to thrive has become a commodity, in a book that shows how the natural world and the global economy converge on our plates.

The longest migrator of any fish species, an Atlantic northern bluefin can travel from New England to the Mediterranean, then turn around and swim back; in the Pacific, the northern bluefin can make a round-trip journey from California to Japan. The fish can weigh in at 1,500 pounds and, in an instant, pick up speed to fifty-five miles per hour.

But today the fish is the target of the insatiable sushi market, particularly in Japan, where an individual piece can go for seventy-five dollars. Ellis introduces us to the high-stakes world of “tuna ranches,” where large schools of half-grown tuna are caught in floating corrals and held in pens before being fattened, killed, gutted, frozen, and shipped to the Asian market. Once on the brink of bankruptcy, the world’s tuna ranches—in Australia, Spain, France, Italy, Greece, Turkey, and North Africa—have become multimillion-dollar enterprises. Experts warn that the fish are dying out and environmentalists lobby for stricter controls, while entire coastal ecosystems are under threat. The extinction of the tuna would mean not only the end of several species but dangerous consequences for the earth as a whole.

In the tradition of Mark Kurlansky’s Cod, John Cole’s Striper, John Hersey’s Blues—and of course, Ellis’s own Great White Shark—this book will forever change the way we think about fish and fishing.

I look forward to reading this book. And I can’t forget Carl Safina’s “Song for the Blue Ocean,” which covers a number of marine species, but gives special attention to the plight of bluefin tuna.